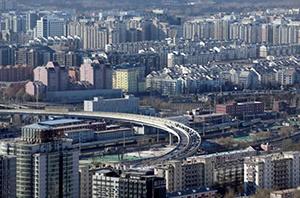 China’s housing market has seen a near two-year boom, giving the economy major boost but stirring fears of a property bubble even as authorities work to contain risks from a rapid build-up in debt.

Average new home prices rose 0.2 percent month-on-month in September, the same rate as in August when prices rose at the slowest pace in seven months, according to Reuters calculations from National Bureau of Statistics (NBS) data out on Monday.

“The curbs are in general still intensifying, which have gradually impacted property buyers’ expectations,” said Zhang Dawei, an analyst with Centaline, a property agency.

While monthly price rises peaked in September 2016 at 2.1 percent nationwide, they have softened only begrudgingly, regaining momentum as buyers shrugged off each new wave of measures to curb speculation.

“China’s property prices are still rising even as sales are falling off a cliff, which suggests the market still sees property as an investment product in the belief that the government won’t let prices fall,” said Yi Xianrong, a Professor of Economics at Qingdao University.

Prices for new private homes in China’s top-tier cities fell 0.2 percent in September versus a 0.3 percent decline in August, the NBS said in a note accompanying the data.

In southern boomtown Shenzhen, which borders Hong Kong, prices stabilized after a drop of 0.4 percent in August. They fell 3.7 percent from a year earlier.

As mega-cities like Beijing imposed increasingly stringent measures, speculators have moved to smaller centers this year where local governments offer cheap credit and impose few restrictions in the hopes of clearing a glut of unsold homes.

However, some second- and third-tier centers such as the southern town of Guilin have also been forced to impose curbs in recent months, banning some buyers from quickly “flipping” properties.

Tier-3 cities rose 0.2 percent from a 0.4 percent increase in August, the NBS said in the note.

While market watchers do not anticipate significant price declines or a crash, weakness in property and construction is starting to drag on broader economic growth.

Data last week showed GDP growth eased to 6.8 percent last quarter from 6.9 percent in the first half, with a marked deceleration in the property sector.

Property sales dropped for the first time in more than 2 1/2 years in September and housing starts slowed sharply, reinforcing views that China’s robust growth is starting to cool.

The majority of the 70 cities surveyed by the NBS still reported a monthly price increase for new homes, although the total dropped to 44 in September from 46 in August.