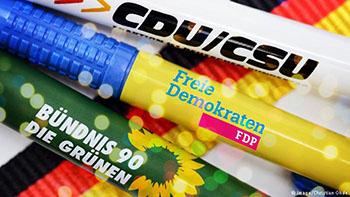 The Green party has called for two vice chancellors as a condition for taking part in a three-way coalition government. Chancellor Angela Merkel’s CDU continue talks with the Greens and the Free Democrats this week.

Germany’s Green party is calling for the unprecedented appointment of two vice chancellors for their participation in a three-way coalition, adding another hurdle to forming a government.

Chancellor Angela Merkel’s Christian Democrats (CDU), Greens and liberal Free Democrats (FDP) are in exploratory talks to form a “Jamaica” coalition, so named for the colors of the three parties.

But negotiations to form a three-way coalition could leave Germany without a government for months, as each of the junior parties put forward their wishes and demands to make their mark on policy.

“Greens and the FDP must equally help coordinate the government’s work,” Michael Kellner, a Green party official, told the Monday edition of the Bild newspaper.

“In such a possible coalition, the coordination of government work can not only be in the chancellery and with another partner,” he said. “Rather, it must lie with all three: the CDU, Greens and FDP.”

The Greens won 8.9 percent of the vote in September’s national election, compared to the FDP’s 10.7 percent. That would give the pro-business party dibs on the vice chancellor position.

The latest demand from the Greens may go against Article 69 of Germany’s Basic Law, which states: “The chancellor appoints a federal minister to be his/her deputy.”

However, the rules of procedure allow for a previously named minister to preside over the cabinet in the event both the chancellor and vice chancellor are absent, or incapacitated.