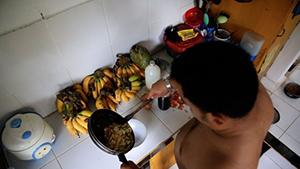 What is it like to be a nudist in a country that prizes modesty and where public nudity is strictly forbidden? Clara Rondonuwu of the BBC’s Indonesian service went to meet some members of the country’s nudist community to find out.

There isn’t a single thread on Aditya’s body.

As he speaks to me, droplets of hot oil splash on to his bare belly from the large frying pan of sand crabs, eggs and Chinese cabbage.

“I love doing everyday things in the buff, including cooking my meals,” he says. “I take a great deal of pleasure in being naked anytime I want to. I feel happier and way more comfortable without clothes.”

Aditya is taking a risk though and therefore doesn’t want his full name revealed. Under majority Muslim Indonesia’s anti-pornography laws, it is illegal to be naked in public.

Yet he meets regularly with four other nudists in private. “We could face jail time if we appeared nude in public,” he explains. “Which is the reason why we let it all hang out in private.”

Aditya has been a nudist in his spare time since 2007.

“I was surfing the web, reading articles about nudism and got really into it. It seemed that it was the life path I had been looking for,” he says.

He made contact with other nudists in the country – they are a small but committed and closely knit group. Jakarta’s naturist group now has about 10 to 15 members, both men and women.

Aditya feels that being naked gives them a stronger connection and lasting bond. “We can be ourselves. No one body shames you no matter how fat or paunchy you are or because of your flaccid penis, breast size or birthmarks. You are nude.”

He dreams of travelling to nudist colonies in countries like France, where his lifestyle choice would be accepted as something not unusual.

Yet while Indonesia’s law doesn’t allow for public nudity, this does not mean that there are no opportunities to go bare.

The group gets together from time to time, renting a holiday villa, like recently in a mountainous area outside Jakarta.

“Within seconds, we disrobe,” he says. They just spend a normal day together, with conversations ranging from anything like politics to work life.

He tells me he just got back from a beach escape at one of Indonesia’s best-kept secret destinations, where he is far from the discrimination he would face elsewhere in the country.

It’s not a nudist site, but it is “well hidden by the dense foliage,” he explains. Even so, he took precautions.

“I picked my time carefully, and went for walks really early in the morning.”

Despite the risks, Aditya also posts openly about his lifestyle on nudist websites.

Among his many Instagram accounts, there was also a private one where he uploaded his nude pictures. One of them showed him fully nude, standing inside a church.

He has since deleted the account as he could be found guilty under Indonesia’s anti-pornography law.

“My fellow naturists said I was pretty reckless to open up on the internet,” he explains.

But he thinks all these posts were necessary to change the many misconceptions about his lifestyle.

“People here in Indonesia think that nakedness has something to do with sex,” he says, pointing out that nudity is not the same as exhibitionism.

“If we strip off together they assume it is a sex party. The truth is, there is nothing sexual about it.”

“People are so hypocritical when they think that being fully clothed is more polite than being open.”

Another naturist who lives on Borneo does not want to be named, and agrees that being a naturist in Indonesia is a “difficult lifestyle decision”.

He looks enviously at places like France and Germany, where nakedness is more accepted, and thinks Indonesian businesses could cater more to the nudist market.

Their best shot would be Bali, which is less strict than the rest of majority Muslim Indonesia. But he says the existing nudist-friendly resorts “cater to foreigners only”.

Rewind 40 years and nudity was common in places like Bali – women would often walk around topless, and bathe naked.

There are no public nude beaches on the mostly Hindu island, though a number of coastal areas remain popular with nudists because they are protected by rocks.

The manager of one resort in Bali says he has two properties which advertise themselves as “clothing optional” and that there are 10 other such resorts in the tourist centre of Seminyak alone.

Additionally, “some of the villas do not promote themselves as naturist-friendly, but many foreigners do go naked in there,” he says.

“Nudism is common for the upper-class people.”

The hotel manager told the BBC he only accepts foreign guests, but said that other resorts might take Indonesian nudists too.

Aditya says he wants to educate society that he and his fellow naturists are human beings just like everyone else.

“Most people tend to be overly expressive when they see something unusual to them. Look how aggressive they are to transgender people, they beat them.”

“What I do is not pornography,” he says.

“I feel sad when they judge me and think of me as immoral, some even called us animals. I am just being myself, it’s nothing grotesque. I don’t harm anyone.”

At times, he explains, he feels like challenging all these misconceptions in social media.

Yet then again, he often just doesn’t have the energy to engage in what he says are long and useless conversation with internet trolls.