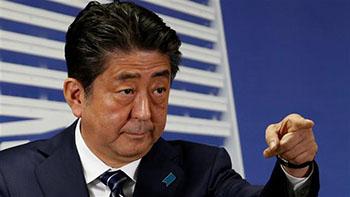 Japan’s Prime Minister Shinzo Abe has promised to “deal firmly” with North Korea, immediately after he won a landslide “super-majority” in the snap elections he had called, for an increased mandate to deal with the “crises” facing his country.

The conservative LDP, together with its coalition ally Komeito Party, has won 312 of the 465 seats in the lower house of parliament, according to local broadcaster NHK.

The results give Abe the parliamentary numbers he needs to pursue his longtime ambition—to give the role of the military a boost amid tensions with North Korea, which has fired two missiles over Japan in recent months.

Speaking after the exit polls on Monday, Abe said, “As I promised in the election, my imminent task is to firmly deal with North Korea…. For that, strong diplomacy is required.”

Japan’s deputy chief cabinet secretary Yasutoshi Nishimura also said that Abe had a phone conversation with US President Donald Trump after his victory, during which the two leaders agreed to work together to increase  pressure on Pyongyang.

Abe is now one step closer to his mandate of revising Japan’s post-war pacifist constitution, which is considered by many conservatives as a humiliating imposition following Japan’s World War II defeat in 1945.

The prime minister had previously proposed to revise a clause of the constitution—known as Article 9—which renounces war completely. Article 9 bans a standing military but has been interpreted to allow armed forces exclusively for self defense.

Abe has set a deadline of 2020 to make that revision happen, but even if he manages to get the approval for such an amendment in the two houses of parliament, he would still need to put it to a public vote in a referendum.

Parties, which are in favor of the change, are now in possession of almost 80 percent of the seats in the lower house of the parliament.

Abe had previously said he needed a new mandate to tackle a “national crisis” from North Korea’s missile and nuclear programs.

Speaking at a news conference on Monday, Abe outlined his North Korea policy and said, “I will pursue decisive and strong diplomacy to tackle North Korea’s missile, nuclear and abduction issues and put further pressure to get it to change its policy.”

He also said he would “thoroughly” discuss North Korea’s nuclear weapons program with Trump during his first visit to Asia next month.

Trump’s planned trip to Asia will include stops in Tokyo as well as in the Chinese and South Korean capitals, Beijing and Seoul.

In the meantime, Trump’s Defense Secretary James Mattis has kicked off a week-long tour of Asia to hold talks with US regional allies on what he has called Pyongyang’s “reckless” provocations.

Mattis, who is in the Philippines, will pay visits to Thailand and South Korea.

Tensions between the United States and North Korea have increased in recent months, with Trump repeatedly threatening military action against the country.

He has claimed that a diplomatic approach over the past 25 years “hasn’t worked” and that Pyongyang has made “fools of US negotiators.”

In response, North Korea has vowed a tough response to any American aggression.

The North has faced tough UN sanctions over its nuclear weapons program, but says it will continue to develop its military programs as a deterrent against the hostile policies of the United States and its regional allies, including South Korea and Japan.