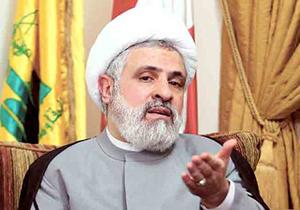 Hizbullah deputy chief Sheikh Naim Qassem stressed Sunday that any attempt to “justify collaboration with the enemy in a certain era does not absolve the collaborator.”

“Israel was and will always be an enemy and anyone who justifies collaboration with it can be called a collaborator in one way or another,” Qassem said.

Qassem’s remarks come amid controversy in the country over the death sentences that have been issued in absentia for Habib Chartouni and Nabil al-Alam over the 1982 assassination of President-elect Bashir Gemayel.

More than three decades after Gemayel was killed in a powerful explosion in Beirut, the case still sharply divides Lebanese — some see him as a national hero while others say he was an Israeli agent. The assassination came at the height of the country’s 15-year civil war and Israel’s invasion of Lebanon.

Chartouni, a member of the Damascus-backed Syrian Social Nationalist Party who has been on the run since escaping prison in 1990, was found guilty of planting the bomb.

Shortly after his arrest in 1982, Chartouni had called Gemayel a “traitor” and accused him of “selling the country to Israel.”