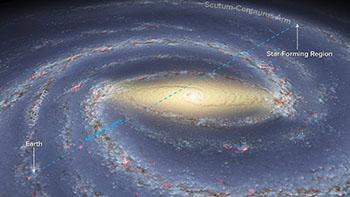 A string of radio telescopes have been used to measure a span of 66,000 light-years from Earth to a star-forming area of space at the other side of the Milky Way.

The feat, achieved using the Very Long Baseline Array (VLBA), a group of radio telescopes found across the US and its territories but centrally operated near Socorro, New Mexico, is almost double the previous measurement record of an object in our galaxy. For context, one light-year is equal to 6 trillion miles.

The study, published in the journal Science, was conducted by the Bar and Spiral Structure Legacy Survey (BeSSSeL), an international group that specialises in mapping the “spiral structure and kinematics of the Milky Way.”

Speaking to Science Mag, the leader of the study, astronomer Alberto Sanna of the Max Planck Institute for Radio Astronomy in Bonn, Germany, said: “This is something amazing. Essentially we are looking at the other side of the galaxy.”

Beginning in 2010, Sanna’s team used the VLBA to track water vapour signals in the galaxy. They then measured the angles between the Sun, Earth and the water vapour, and then again six months later when the Earth was on opposite sides of the Sun, to accurately calculate its total distance from the Earth.

Image of the Milky Way with measured sources (green), and sources which will be measured in the next year (red) © Bar and Spiral Structure Legacy Survey (BeSSSeL)

The technique, which is called ‘trigonometric parallax’, was then applied to measure the distance between Earth and a star in the Scutum-Centaurus spiral arm – a length of about 66,000 light-years. The previous record for parrallax measurement was about 36,000 light-years.

According to Mark Reid, senior radio astronomer at the Harvard-Smithsonian Center for Astrophysics, the technique could be used to develop a detailed map of the Milky Way within the next 10 years.

Reid told the Albuquerque Journal that just 200 celestial objects have been mapped so far, but at least 100 will have to be done from the Earth’s southern hemisphere.

Other teams, too, are joining in the mapping effort. In April 2018, the European Space Agency will launch its Gaia probe. A satellite capable of producing detailed 3D coordinates for more than one billion objects, most of them stars, in our galaxy. This, the ESA says, amounts to about one percent of the Galactic stellar population.