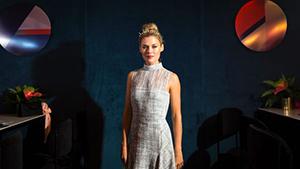 As a survivor of domestic violence, actress Rachael Taylor said she feels “deep gratitude” to all the women – famous and not famous – who have shared their stories of harassment, assault and abuse in the wake of the Harvey Weinstein scandal.

“I am so enormously empowered and in deep gratitude for the women who have spoken out about their experiences. In some respects it’s an incredible time for this moment of radical honesty,” Taylor told Fairfax Media at the Caulfield Cup in Melbourne on Saturday.

“The more we can open up space for conversation about men’s violence against women in all of its forms the more we can destigmatise the issue and encourage other people to come forward and share their stories.”

Since the Weinstein sexual harassment and abuse allegations surfaced in the New York Times on October 5, women worldwide have used the hashtag #metoo to share their own experiences of harassment, abuse, rape and torture.

Taylor, who plays radio host Trish Walker in the Netflix Marvel series Jessica Jones and the Defenders, took out an apprehended violence order against her ex-fiance, actor Matthew Newton, in 2010 but did not speak publicly about her experience for some years.

“I took my time to talk about it and consider the most effective way to do it not just for me but for my main objective which was to bring light and attention to the issue,” she said on Saturday. “By the time I opened up about it the outcome for me was all positive.”

“I always remain an optimist in terms of believing that we can turn this around and we can see a reduction in the rate of domestic violence in this country and in men’s violence against women across the board. What these women are doing right now will help that – they’re extraordinary; I stand alongside them,” she said.

Taylor said the attention on the entertainment industry must not be to the exclusion of the problem of sexual harassment in other fields.

“There are lots of workplaces where that story remains really relevant, not just in the entertainment industry, although that’s a significant one. Women in the tech world, across the board this is a story that needs to have light shed on it,” she said.

Taylor has worked with the domestic violence awareness and prevention organisation White Ribbon and took part in the women’s rights march in New York in January.

She said it was important that women supported one another through life’s toughest challenges, something she has in common with her character in Jessica Jones.

“We’re similar in the sense that we both prioritise our female friendships quite highly … Right at the centre of [the show] is the strength of female friendship and how much women need other women to have their backs.”

Taylor, who grew up in Tasmania, said all her closest girlfriends caught up regularly over Facetime.

“The pleasure of good girlfriends is that you’re there [for each other] to process and unpack emotions.”