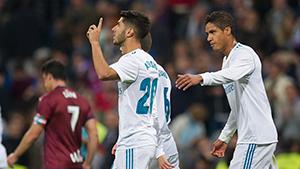 Spain midfielder Asensio saw his inswinging cross diverted into the net by Eibar defender Paulo Oliveira with 18 minutes played at the Bernabeu before sweeping in the second 10 minutes later.

Champions Real, who had dropped seven points in their opening four home games, never looked in danger of slipping up in this match and substitute Marcelo completed the scoring late on to leave them third in the table, five points adrift of leaders Barcelona, who won 2-0 at home to Malaga on Saturday.

The alterations had little impact on the result and Real were in full control from the moment Oliveira unwittingly headed Asensio’s dangerous cross past his own goalkeeper Marko Dmitrovic.

Asensio quickly doubled the advantage with a clinical half-volley from Isco’s centre which flew through the arms of Serbian Dmitrovic.

Cristiano Ronaldo had an uncharacteristically quiet night in the Spanish capital and it was left to left-back Marcelo to wrap up a straightforward victory as he exchanged passes with fellow substitute Benzema in the 82nd minute before turning to find the bottom right corner.

Atletico Madrid are a point and a place behind their city rivals following a 1-0 victory at Celta Vigo.

Kevin Gameiro’s first goal of the season proved decisive at Balaidos, with the Frenchman hooking home from close range in the 28th minute after Celta’s defence failed to deal with Saul’s right-wing corner.

The win was Atletico’s first in three matches following successive draws, although they were lucky not to be pegged back as Iago Aspas was denied by a fine save from Jan Oblak and later rattled the crossbar with a free-kick.