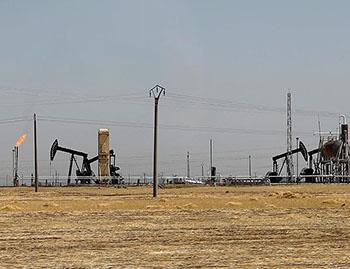 U.S.-backed forces said they captured Syria’s largest oil field on Oct. 22, pressing their assault against Islamic State of Iraq and the Levant (ISIL) in the east of the country.

The Syrian Democratic Forces (SDF), dominated by the Syrian-Kurdish People’s Protection Units (YPG), said they took al-Omar field on the eastern bank of the Euphrates River in the early hours.

Turkey considers the YPG as an offshoot of the outlawed Kurdistan Workers’ Party (PKK), hence a terrorist organization.

“Our forces liberated the fields without notable damages,” said a SDF spokesperson.

The jihadists holed up in buildings in a nearby district, where the SDF was trying to hunt them down, the spoekesperson said.

With U.S.-led jets and special forces, the SDF has been battling in Deir ez-Zor bordering Iraq. The group has focused on territory east of the river, which bisects the oil-rich province.

The Syrian army, with Russian air power and Iran-backed militias, has been waging its own separate offensive against ISIL, mostly to the west of the river.

The U.S.-led coalition and the Russian military have been holding de-confliction meetings – to prevent clashes between planes and troops – though the two offensives have sometimes come into conflict.

ISIL has lost vast territory across Syria, and has now come under attack in its last footholds in a strip of the Euphrates valley and the desert in Deir ez-Zor.

The SDF declared victory over the jihadists in their former headquarters in Raqqa city last week. Last month, they captured a major natural gas field upstream of Oct. 22’s advance.

Al-Omar oil field lies some 10 kilometers north of the town of al-Mayadin, which government troops and their allies took earlier this month. The town had turned into a major base for ISIL militants after the U.S.-backed offensive drove them out of Raqqa.

The Syrian Observatory for Human Rights said ISIL militants who had withdrawn from the oil field mounted a counter-attack overnight against government forces. The militants made some gains around al-Mayadin, the Britain-based monitor said.

But a Syrian military source denied this, saying there was no significant attack and fighting raged on at the same pace.

Any attack by the ISIL militants there was a “desperate attempt”, the source said. “The Syrian Arab Army is attacking, hitting Daesh positions…and advancing,” the source said, using the Arabic acronym for ISIL.