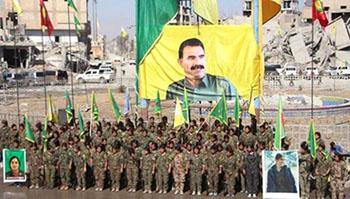 Amid Turkish reactions to the display of a huge poster of Abdullah Öcalan, the jailed leader of the outlawed Kurdistan Workers’ Party (PKK), in the Syrian city of Raqqa on Oct. 19, the US Embassy in Turkey stated on Saturday that Öcalan is “not worthy of respect.”

“The PKK is an organization on the list of Foreign Terrorist Organizations and Öcalan is in prison in Turkey due to his terrorist activities connected with the PKK. He is not a person worthy of respect,” the embassy said in a statement on Saturday.

Öcalan’s banner was displayed by Syrian Kurdish People’s Protection Unit (YPG) militants in Raqqa on Thursday following the city’s liberation from the terrorists of the Islamic State in Iraq and the Levant (ISIL).

“We condemn the display of PKK leader and founder Abdullah Öcalan during the liberation of Raqqa,” Pentagon spokesman Maj. Adrian Rankine-Galloway said on Friday in Washington’s first reaction.

Ankara strongly reacted to the Öcalan banner in Raqqa.

“They hung up posters of the chief terrorist [Öcalan] in Raqqa. How will the US explain that?” President Recep Tayyip Erdoğan said on Friday, while Prime Minister Binali Yıldırım said on the same day, “Such images are a great misfortune.”