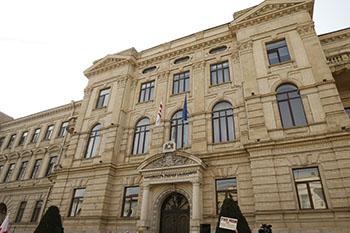 Trump’s pressure on the NFL to censor its players is a First Amendment issue.

Earlier this month, the Supreme Court of Georgia answered a question that has long tormented American youth—or at least me when I was an American youth: If I flip off the pastor, can the police put me in jail?

The answer, in Georgia at least, is no: “a raised middle finger, by itself, does not, without more, amount to fighting words or a true threat,” the state court said. For that reason, a disgruntled parishioner could not be convicted of acting “in a violent or tumultuous manner” and placing another person “in reasonable fear of” their safety.

The protected nature of the middle finger has long been established in American law. But the defendant in Freeman v. State exercised his right to bear digit in the church sanctuary. That fact touches on a larger question that should be well understood but isn’t—the free expression rights of professional athletes.

First, though, the case: on August 3, 2014, David J. Freeman attended Sunday services at the Flowery Branch campus of 12Stone church, a mega church with locations in eight Georgia communities. On that occasion, associate executive pastor Jason Berry asked teachers present to stand for a start-of-the-school-year blessing. Freeman is a home-schooling parent who objects strongly to public education. As related by the Georgia court, “Freeman raised his middle finger in the air and stared angrily at the pastor,” then “began yelling about sending children off to the evil public schools and having them raised by Satan.” This harangue was partially drowned out by the alert music minister. After the congregation filed out, Freeman urged Pastor Berry to be ashamed of himself, then left.

Freeman was convicted of disorderly conduct, which under Georgia law requires “violent or tumultuous behavior.” (Prosecutors conceded that flipping someone off is not “violent,” but insisted it was “tumultuous.”) The Georgia supreme court said the disorderly conduct statute could not constitutionally be applied: “there was no showing here that Freeman’s act of silently raising his middle finger from the back of the church during the church service constituted ‘fighting words’ or a ‘true threat’ that would amount to a tumultuous act … .”

There’s a dog that didn’t bark here; Freeman’s discourtesy occurred entirely on private property, but that simply didn’t enter into the calculus. As guaranteed by the First Amendment, “the freedom of speech” follows Americans into houses of worship, and everywhere else. Threats, incitement to riot, “fighting words,” defamation, fraud and a few other classes of expression are, as a matter of history, outside “the freedom of speech”; but otherwise, wherever in the U.S. speech occurs, a speaker cannot be punished by the state because of the message the speech conveys.

That’s not to say that 12Stone church can’t, if it chooses, ask Freeman to leave the service. If he refuses, he might be arrested—but that refusal is conduct, not speech. The church can also excommunicate Freeman or otherwise penalize him as a church member—church membership is a private matter. But the state can’t punish him for being a bad parishioner.

The distinction is important.  Thanks to President Trump, the First Amendment rights of professional athletes have become subjects of debate. In a speech in Alabama, Trump attacked Colin Kaepernick, the former San Francisco 49ers quarterback who last season refused, because of his concern over police killings of African Americans, to stand for the national anthem—first remaining seated, then taking a knee—last season: “Wouldn’t you love to see one of these NFL owners, when somebody disrespects our flag, to say, ‘Get that son of a bitch off the field right now. Out! He’s fired. He’s fired!’”

Trump’s remarks turned into a series of angry tweets; in response, NFL players began kneeling during the anthem to show their solidarity with Kaepernick, who has yet to be signed to play for any pro team this year, and has filed a grievance accusing team owners of colluding to keep him unsigned.

Trump then demanded that the league, and the team owners, require players to stand. When some owners appeared reluctant, he turned up the heat, threatening retaliation against the league:

Why is the NFL getting massive tax breaks while at the same time disrespecting our Anthem, Flag and Country? Change tax law!

Meanwhile, in bars and parlors across the country, the issue of the flag and the anthem are being aired—and one massive misconception is that, because the players are private employees performing in a private venue, the First Amendment doesn’t apply to their protest.

Of course it does. Just like David J. Freeman in church, they are protected from being jailed, or in any way punished by the state, because someone considers their protests offensive or unpatriotic.

As private business owners, the owners may negotiate a contract with their players—including one that requires the players to stand during the anthem. Whether the NFL players’s agreement gives the owners that power may very well wind up in court—but as a matter of contract, not constitutional, law.

But, if the owners were acting for the government—or under government threat or  compulsion—then, as Sir Edward Plowden might once have said, the case is altered. The First Amendment really would come into play.

The First Amendment does not just protect the players against prosecution for crime. Under a long line of cases, it also forbids any kind of official retaliation because of their protected speech. Retaliation cases are a staple of public employee law; teachers, say, or other government workers may speak—outside of work—about public matters and find themselves demoted or fired not long afterwards. If the employee can show that the adverse action was taken because of the protected speech, then whoever ordered the retaliation can be sued for violating free-speech rights.

So what, right? The owners aren’t the government.

If someone powerful—let’s say the president—uses threats, persuasion, and pressure to conscript the owners in his culture war; and if those owners, at the president’s demand, punish their players; then caselaw suggests those private figures may in a sense become the government—and thus can be sued as surely as a public official can.

Columbia Law Professor Tim Wu points to the case of Page v. Coyner, decided in 2010 by the Sixth Circuit. Martha Paige worked for a development company; as a private citizen, she appeared at a county hearing to oppose a road project. An outraged county official then called her employer and said (falsely) that Paige had used her company title in her remarks. Three days later, the company fired Paige.

She sued the official; the Sixth Circuit decided that, if the official called her employer as an act of retaliation, then the employer’s private action became “state action”—and thus could be the basis of a First Amendment lawsuit.  (One judge wrote separately to emphasize that Paige need not prove that the county official “ordered” the employer to fire her, simply that the official exercised “coercive power” or provided ”significant encouragement, either overt or covert” that led to the firing.)

Even if the players prove retaliation, they still won’t be able to get damages from Trump; in a 1982 retaliation case, the Supreme Court held that a president, acting in official capacity, is immune from damage suits.

But what about the owners? Last I checked, they had really deep pockets. What if they, like the company in Paige, become “state actors”?

Consider Dossett v. First State Bank, an Eighth Circuit case. A bank employee questioned a school district policy at a public meeting; afterwards, officials of the school district (which kept a lot of money in the bank) expressed their displeasure with her to the bank’s president. The president fired the employee. The appeals court held that if “a school official reach[es] a mutual understanding with a private actor to retaliate against a private citizen” that retaliating private actor becomes a “state actor”—and can be sued.

Trump’s tweets and threats may seem hollow, of course. The president by himself does not have the power to change the NFL’s tax status. But it is hornbook law that says even threats by themselves may chill protected speech. And in Dossett, the court of appeals emphasized that officials threats can establish state action even if the official lacks the power to carry them out. Maybe nobody could sue Trump; but if the owners reach a “mutual understanding” with him, they might not be immune.

The questions is whether the NFL’s actions in such circumstances, from a constitutional standpoint, are those of private entity or of a state actor. “I’d say that when the president orders a private entity to censor someone, and they do, the state has acted in constitutional terms, full stop,” Columbia’s Wu told me in an email.

“This is, to my mind, all about what happens when the White House commands or demands private censorship,” he added. “It has been a signature move of this administration—to order this or that private entity to fire someone for their speech, or begin [to] enforce the President’s preferred speech rules, etc.  It is sort of outsourcing censorship, or censorship by proxy and I think it has begun to reach constitutional concern.”

Trump’s attack on free expression, if nothing else, represents an upraised middle finger directed at the First Amendment. Powerful private parties might want to hesitate before they say amen.