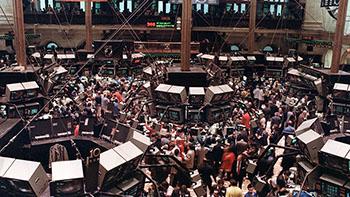 Thirty years ago Wall Street slid into the abyss, suffering the biggest one-day market fall of over 22 percent. Since then the Dow Jones has risen from 1,738 points to an all-time high of over 23,000, raising fears another historic crash is on the cards.

RT talked to Keiser Report host Max Keiser about the root causes of the 1987 crash and the possibilities of another market meltdown.

Today’s stock market has parallels to the 1987 market, said Keiser, adding that “valuations are at historic highs.”

“The Fed (and central bank counterparts) are pumping money, and sentiment is wildly bullish.”

On October 19, 1987, stock markets around the world crashed, shedding billions in value very quickly. The crash began in Hong Kong and spread to Europe, hitting the United States after other markets had already declined by a significant margin. The Dow Jones Industrial Average which comprises the 30 largest US publicly traded companies, lost 22.6 percent of its value that day.

Keiser says to understand what happened with the market we have to recall the global financial crisis of 2008.

According to him, “unprecedented amounts, over $20 trillion in cash, was printed and thrown at Wall St. creditors to repair their technically insolvent balance sheets.”

“There was no reform or attempt to reign in the crooked behavior of bankers at all. In turn, they interpreted this as a ‘green light’ to keep doing what they had been doing that led to the crash; namely, engage in extreme, reckless borrowing to speculate.”

A former stockbroker, Keiser said that now in 2017, the debt pyramid has never been higher. “Just one indicator of this would be the sovereign bond market in the US and UK that are trading at multi-hundred-year highs thanks to the Ponzi-economics of central bank debt monetization (printing money and buying back their own debt).”

Talking about the risks of another Black Monday equities crash, Keiser said it is impossible to say exactly when “this truckload of market risk explodes but it’s 100 percent guaranteed and will be by far the biggest loss of wealth ever recorded.”

He added that “countries like Russia are smart to be loading into Gold and initiating crypto strategies ahead of the ‘bond-pocalypse’ and equity inferno.”

Individual investors should be doing the same, Keiser said.