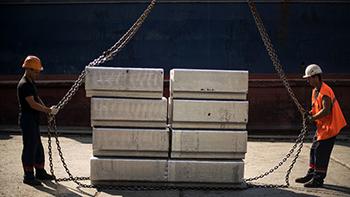 Russian metals tycoon Oleg Deripaska would like to see a valuation of at least $8.5 billion for his aluminum and hydrocarbon business in the first Russian IPO in London since 2014.

The EN+ listing will test investor sentiment toward a major Russian company since relations between the Kremlin and the West deteriorated. The company is planning to raise $1.5 billion for 18 percent of its shares in the IPO in November and has priced the shares at $14 to $17. The $8.5 billion valuation would put En+ among Russia’s 30 biggest public companies.

“After we announced our intention to enter the IPO on October 5, we felt a surprisingly high level of interest in investing in the En+ Group, and we are happy to move on to the next stage of our proposal – the announcement of the price range,” said Maksim Sokov, CEO.

The En+ IPO will be the first placement of a Russian company on the stock exchange in London since the introduction of sanctions against Russia in 2014.

Revenue of En+ in the first half reached $5.8 billion, up 23 percent compared to the same period last year.

The primary owner of En+ is Deripaska, who owns 95.65 percent of its shares. Forbes estimates his fortune at $5.1 billion. The other 4.35 percent of the holding belongs to VTB Capital.

A part of the funds raised through the IPO will be used to fully repay the company’s debt to VTB, which stood at $942 million at the end of June, according to business media RBC.