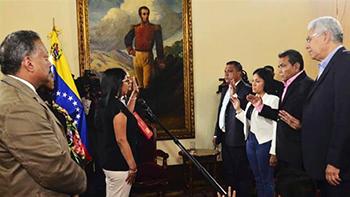 Four of Venezuela’s five newly-elected state governors affiliated with the opposition have pledged allegiance to the pro-government Constituent Assembly, which they had earlier rejected as illegitimate.

The four governors from the opposition-backed Democratic Unity Coalition were sworn in before assembly directors on Monday as a prerequisite to taking office.

It was seen as the latest setback for the opposition, which entered the gubernatorial polls on October 15 to defeat President Nicolas Maduro’s candidates but ended up winning only five of the 23 state governorships.

After initially claiming fraud, the opposition later admitted that abstentions among its supporters played a major role in the crushing defeat, which also raised doubts about its chances of achieving victory over the ruling Socialist Party in the presidential poll next year.

The opposition had boasted after the vote that none of its winning candidates would “kneel” before the government-backed Constituent Assembly, which it has refused to recognize since its establishment in July.

That assembly, which came into existence after elections boycotted by the opposition, has taken over the powers of the opposition-controlled parliament.

Maduro announced on state television late on Monday that he had congratulated the four opposition governors by telephone and would meet with them as soon as Tuesday.

“I’ve told them: ‘Let’s turn the page… and get down to work,’” said the Venezuelan president.

The four governors are from the Democratic Action Party, one of the largest parties in the opposition coalition, and their decision on Monday infuriated many opposition followers, who regarded the move as a sellout.

The fifth governor, Juan Pablo Guanipa of the Justice First Party, which has a militant line against Maduro, insisted that he would not legitimize the “fraudulent” Constituent Assembly.

The development may bring about a total reformulation and potential breakup of the opposition coalition, which consists of more than two dozen parties and has long suffered from infighting.

The coalition’s biggest triumph came in a major victory during the December 2015 legislative polls.

After presiding over the swearing-in ceremony, Constituent Assembly Chairman Delcy Rodriguez rebuked Guanipa, from the oil-rich Zulia State, saying, “These actions will have consequences.”

Maduro had previously warned that there might be a new election in any state whose winner would not swear loyalty to the assembly.

The Constituent Assembly is packed with government supporters.