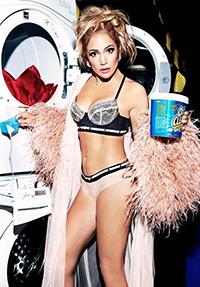 JENNIFER Lopez put her infamous curves on full display in a sex-rated video.

Kim Kardashian broke the internet in 2014 when she flaunted her out-of-this world peach for a naked cover story with Paper magazine.

Reclaiming her bootylicious title, Jennifer Lopez followed suit earlier this year when she posed in barely-there showgirl outfits for the magazine’s Vegas issue.

But it seems the shoot was even more temperature-raising than fans first imagined, as a behind-the-scenes video has just been released of JLo lighting up the set.

Giving her 69.3 million followers the gift of a lifetime, the 48-year-old shared a short film of her dazzling cover story to Jennifer Lopez’s Instagram.

Making sure to get her fans’ attention, she captioned the moment: “Follow me…” alongside the hashtags “Vegas”, “All I Have” and “Vegas Strong”.

The temperature-raising sequence kicked off with a shot of the mum-of-two walking up a staircase, wearing nothing but see-through underwear.

Flashing her entire booty in a flimsy chain thong, Jennifer left nothing to the imagination as she brazenly embraced her birthday suit.

With a coat hanging off her arm, the US beauty made sure to parade her curves in all their glory as she turned round to reveal her face to the camera.

In another scene, the starlet switched up her look by styling her long locks in an up-do and wearing a black bra and knickers.

Channeling her inner Desperate Housewife, the siren could be seen loading a washing machine as she looked over her shoulder.

Amping up the sex appeal yet again, the Latina beauty wore a star-encrusted black body suit, which featured a plunging neckline and fishnet tights.

Putting on a raunchy display, the body confident babe grabbed her boobs during a steamy hands-on moment.

Looking every inch the Las Vegas showgirl, she then modelled a glittering silver bodysuit with an elaborate headpiece.

In a nod to her native New York, the Jenny From The Block singer — who has a Vegas residency titled All I Have — stood on a mock subway train.

True to form, JLo’s fans were quick to praise the skin-baring video, which has amassed close to 1.5 million views in less than a day.