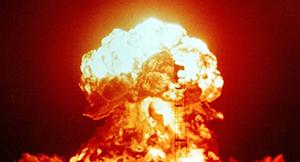 Reports that the US is preparing to put B-52 nuclear bombers on 24-hour alert are nothing short of a “major escalation of US nuclear war readiness,” Kevin Kamps, radioactive waste watchdog at Beyond Nuclear said on Monday’s episode of Loud & Clear.

On Sunday evening, Defense One broke a major story that the US Air Force is getting ready for round-the-clock nuclear readiness. “I look at it more as not planning for any specific event, but more the reality of the global situation we find ourselves in,” said Gen. David Goldfein, chief of staff for the Air Force.

“I’m racking my brains trying to think of a reason, other than to threaten North Korea, for the military to take an action like this,” said John Kiriakou, veteran CIA intelligence analyst and Loud & Clear co-host.

​Pyongyang seemed to interpret it the same way. “Dignitaries of the White House, and State and Defense Departments of the US are having a hard time cooling Trump overheated with war fever,” according to a KCNA report published in response to the news. “Lunatic Trump is running headlong into ruin, taking America with him,” the KCNA report said.

Importantly, though, defense officials have stressed that the order to activate the 24-hour state of alert has not yet been given. The service is ensuring the Barksdale, Louisiana, Air Force Base that is home to the country’s nuclear B-52 bombers is prepared for that order. If the B-52s go on alert, they will be relocated to sit on the runway every moment of the day, with crews standing by, waiting for a potential doomsday situation. If airmen receive that order, it will be the first non-stop nuclear alert posture the US has adopted since the Cold War ended in 1991.

What has been omitted from the discussion on North Korea among US officials may be just as significant as the overt threat of nuclear war. “One thing that nobody seems to be talking about here is diplomacy,” Kiriakou observed.

The intelligence expert continued, “We have the likes of Jimmy Carter, a Nobel Peace Prize winner, offering to initiate diplomatic exchange with the North Koreans. We have former Governor of New Mexico Bill Richardson, doing the same thing. My God, we could have [former NBA star] Dennis Rodman if we wanted somebody who knows Kim Jong-un personally and has offered to help.”

“But we’re not at all talking about diplomacy. We’re only talking about putting B-52s on 24-hour alert, and sending ships, and committing troops and CIA special operations… it looks like the only trajectory that we’re seeing is military in nature,” Kiriakou said.