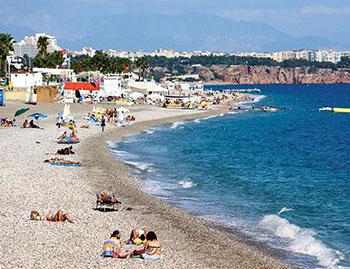 The number of visitors from the United Kingdom to Turkey has increased, Foreign Minister Mevlüt Çavuşoğlu has said, raising expectations that more tourists from Germany and other European countries will pick Turkey next year.

The minister’s remarks come at a time when Turkey and a number of European Union countries led by Germany are facing diplomatic rows.

A multitude of issues have caused friction between Ankara and Berlin, including the jailing of several Germans on terrorism-related charges in Turkey and the outlawed Kurdistan Workers’ Party (PKK) rallies in Germany, which Turkey demands to be banned.

German Chancellor Angela Merkel praised Turkey on Oct. 19 for its handling of refugees but said she was very concerned over the rule of law in the country. The European Union decided last week to cut some of the pre-accession money earmarked for Turkey but stopped short of completely halting the membership bid of the country, a ruling advocated by Germany. Merkel came under pressure from her rivals ahead of the Sept. 24 elections to suspend Turkey’s EU membership talks amid recent tensions.

“Our countries may have a split of opinion and may face some problems. Our duty is to solve these problems through dialogue,” Minister Çavuşoğlu said.

“We are spending sincere effort on these issues but politicians should avoid taking steps that could punish their own citizens and civilians in times of trouble,” he said.

Çavuşoğlu remained optimistic about European tourists, arguing that those who picked other countries instead of Turkey in recent years were disappointed.

“They were not happy with the places they visited in the past two years. They say they were almost robbed. They want to come back to Turkey, said the minister.

Early reservations point to a 15-20 percent rise in the number of German tourists visiting Turkey next year, Michael Frenzel, president of the federal association of Germany’s tourism sector told Reuters on Oct. 23.

Çavuşoğlu also said there was a rise in the number of people visiting Antalya for golf.

At the ceremony that marked the 25th year of Turkey’s OTI Holding, Çavuşoğlu addressed 2,000 people from 30 countries, mostly the owners of tourism agencies and representatives from airline companies.