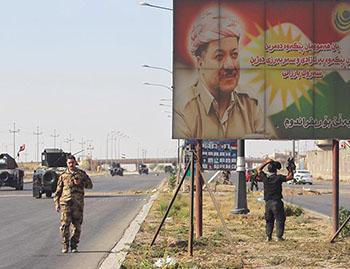 Russian Foreign Minister Sergei Lavrov on Oct. 23 called for talks between the Kurdistan Regional Government (KRG) and Baghdad, as pressure has been mounting for the establishment of dialogue between the two sides after the KRG’s independence referendum.

“We understand the hopes of the Kurdish people to strive and strengthen their identity … But it would be right to realize these hopes through dialogue with the Iraqi government,” Lavrov said after talks with Iraqi counterpart Ibrahim al-Jaafari, while warning that the issue should be addressed “with consideration of the need to avoid creating another source of instability in the region.”

“However, we believe it is correct to realize those desires and those hopes exclusively via the Iraqi government and fully take into account the significance the Kurdish question has on a regional scale, and take into account the need to avoid additional sources of instability in the region,” he added.

Iraqi Kurds on Sept. 25 voted overwhelmingly for independence in a poll set in motion by KRG leader Masoud Barzani and strongly opposed by Baghdad.

In addition to Baghdad, neighbors Iran and Turkey opposed the referendum.

Central government forces last week swept into the oil-rich Kirkuk province, restoring it and Kurdish-held parts of the Nineveh and Diyala provinces to Baghdad’s control, dealing a severe blow to Barzani.

Iraqi Prime Minister Haider al-Abadi said on Oct. 17 the independence referendum Iraq “is finished and has become a thing of the past,” while calling for dialogue with the Kurdish leadership “under the constitution.”

Lavrov also said that Baghdad does not “reject” Kurds, ban their language or destroy their monuments, so “all components” are in place for them to figure out how to “live together in a unified Iraq,” stressing Moscow’s commitment to Iraq’s territorial integrity.

“We don’t see war yet, and we hope that it won’t happen between the Kurds and government troops of Iraq,” he added.

“The sides should decide if they will engage in direct dialogue or if they need some sort of intermediaries,” Lavrov also said.

The Russian minister said Moscow would continue its economic ties with Iraqi Kurdistan, as it does with other constituent parts of Iraq. He said Russia was not closing its consulate in Arbil, the main city in Iraqi Kurdistan, but said the mission was subordinate to the Russian embassy in Baghdad.

Meanwhile, elections for the KRG presidency and parliament set for Nov. 1 will be delayed because political parties have failed to present candidates, the head of the electoral commission Hendrean Mohammed told Reuters on Oct. 23.

Parties have been unable to focus on the elections because of turmoil that followed the referendum, a Kurdish MP said on condition of anonymity.

The Kurdish electoral commission’s Mohammed, speaking by phone from the KRG capital Arbil, said it is up to the Kurdistan region’s parliament to fix a new date for the elections.

The current KRG presidency held by Barzani since 2005 and the current parliament elected in 2013, are expected to continue until new votes are held, he said.

The loss of Kirkuk prompted calls from Gorran, the main opposition party to Barzani, for his resignation.

Gorran, or the Change Movement, supports the right of Iraq’s Kurds for self-determination but it opposed holding the referendum, saying the timing was ill-chosen.

Also yesterday, KRG authorities said they had issued arrest warrants for 11 Iraqis including leaders in a powerful paramilitary group, in an apparent tit-for-tat move after Baghdad took similar measures.

The prosecution in the KRG said in a statement it had issued warrants for 11 people and asked a court in Arbil to take legal steps to pursue the matter.

Among those targeted is Qais al-Khazali, founder and leader of Asaib Ahl al-Haq, an Iran-backed Shiite militia that is one of the main components of the Hashed al-Shaabi paramilitary group.

The powerful Hashed, also called Popular Mobilization Forces, has been a key player in the fight against the Islamic State of Iraq and the Levant (ISIL) in Iraq alongside federal forces.

Last week, they also took part in the Kirkuk operation that left 31 people dead from all sides.

“No party has the right to interfere in Iraqi matters,” Abadi’s media office said in a statement citing a source close to the prime minister.

Tillerson on Oct. 22 demanded that Iranian “militias” leave Iraq at a press conference in Riyadh, where the U.S. diplomat is holding talks with top Gulf officials.