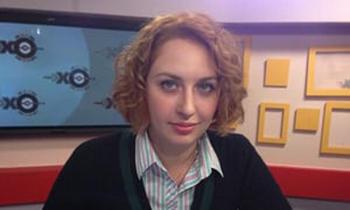 Tatyana Felgenhauer, a well-known journalist for Russia’s top independent radio station Ekho Moskvy, has been stabbed in the throat by a man who burst into her studio. Felgenhauer is in an induced coma in hospital.

Tatyana Felgenhauer was still conscious after the attack on Monday. She was able to walk but it soon became clear she had been seriously injured.

The 32-year-old was taken to hospital and underwent more than an hour of surgery before doctors put her into an induced coma. Her life is not under immediate threat.

The attacker broke into the building and sprayed gas into the face of a security guard at lunchtime on Monday. He then jumped over a barrier and took the lift up to the 14th floor, where the Ekho Moskvy (Echo of Moscow) radio station has its studios and walked into the room where an editorial meeting was being held.

He was detained by a security guard and arrested by police, who are treating the attack as attempted murder.

Russian authorities have named the attacker as a 48-year-old with dual Russian and Israeli citizenship.

In a blog post, he is reported to have complained that Felgenhauer was “following” him in his mind.

Russian media also claimed that during police interrogation he said Felgenhauer had made telepathic contact with him over the past five years.

However, Alexei Venediktov, the radio station’s editor-in-chief, asked how the attacker knew the layout of the office and Felgenhauer’s schedule. He cast doubt on claims the attacker was an unstable individual working alone.

Despite being owned by the media arm of energy giant Gazprom, Ekho Moskvy is known for its independent journalism with reports and discussions critical of the Kremlin. Earlier this month, a report on state television channel Russia 24 singled out the station and Felgenhauer, accusing them of advancing foreign interests in Russia as an “arm of the US State Department” in the lead-up to next March’s presidential election.

Russia’s major television channels are either owned by the state, operate as state enterprises or, as in the case of NTV, owned by Gazprom’s media arm. Two major news agencies, Rossiya Segodnya and Tass, are state controlled, with the administration of Russian President Vladimir Putin exerting a strong influence over political coverage.

Shaping a more equal future for women and girls: Op-ed