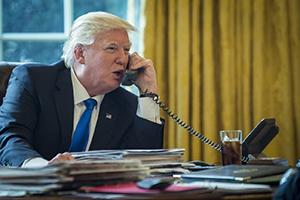 WASHINGTON (The Borowitz Report) – Calling himself “unbelievably brave,” Donald Trump  said on Monday that he is the only President in U.S. history with the courage to stand up to war widows.

“You look at guys like Obama and Clinton and the Bushes, when it came to war widows, they all blinked,” he said. “For years, we weren’t winning at widows.”

In contrast, Trump said, he has made defeating war widows one of his top priorities as President. “Forget about Iran and China and Little Rocket Man,” he said. “This country has been pushed around by war widows for far too long.”

Trump said that Senator John McCain, who has mocked the President’s draft-dodging during Vietnam, has “never shown an ounce of courage when it comes to fighting war widows.”

“McCain can talk about what he did in Vietnam all he wants,” Trump said. “But the guys who have gone toe to toe with a war widow, contradicted her version of events, and refused to back down—we are the true heroes.”

-Andy Borowitz is the New York Times best-selling author of “The 50 Funniest American Writers,” and a comedian who has written for The New Yorker since 1998. He writes the Borowitz Report, a satirical column on the news, for newyorker.com.