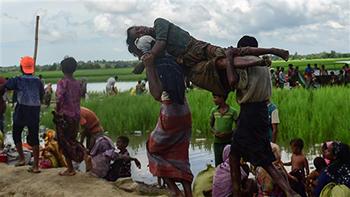 The United States says it is considering sanctions against parties responsible for the atrocities against minority Rohingya Muslims in the Buddhist-majority Myanmar.

“We express our gravest concern with recent events in Myanmar’s Rakhine State and the violent, traumatic abuses Rohingya and other communities have endured,” the US State Department said on Monday. “It is imperative that any individuals or entities responsible for atrocities, including non-state actors and vigilantes, be held accountable.”

“We are exploring accountability mechanisms available under US law, including Global Magnitsky targeted sanctions,” it added, referring to a US law that allows penalties against perpetrators of human rights violations.

Rakhine State, where Rohingya Muslims have lived for generations, has been under military siege since late last year. Access is denied to journalists and rights activists, but the Muslims who have managed to flee to Bangladesh have told of horrendous violence being carried out there. Soldiers have been killing and raping the Muslims and have even been shooting at fleeing civilians, including women and children, at random, according to witnesses.

The brutal atrocities have been deemed “ethnic cleansing” by the United Nations and have sent more than one million Rohingya Muslims to neighboring Bangladesh, creating a humanitarian emergency there.

The US State Department said some minor measures have already been taken against Myanmar, including ending travel waivers for current and former members of the Southeast Asian country’s military.

“We have rescinded invitations for senior Burmese security forces to attend US-sponsored events; we are working with international partners to urge that Burma enables unhindered access to relevant areas for the United Nations Fact-Finding Mission, international humanitarian organizations, and media,” the statement said.

In addition, Washington is “consulting with allies and partners on accountability options at the UN, the UN Human Rights Council, and other appropriate venues,” it said.

The US seems to be attempting to divert blame away from Myanmar’s government, headed by Aung San Suu Kyi, and pin the blame specifically on the country’s military.

Secretary of State Rex Tillerson said on Wednesday the United States held Myanmar’s military leadership responsible for the crackdown on the Rohingya.

But as leader of Myanmar, Suu Kyi has taken almost no meaningful action to end the abuses against the Rohingya. While some reports have said she may not have an influence over the military leaders, she has taken a stance that strikingly resembles theirs.

During an urgent meeting on Monday, the UN Council for Humanitarian Affairs and Emergency Relief in Geneva described the Rohingya refugee crisis as a “shocking humanitarian emergency.”

The International Organization for Migration (IOM)’s Director General William Lacy Swing warned that “the speed, scope and scale of the Rohingya refugee crisis requires a massive humanitarian response from the international community.”

The IOM has estimated that since August 25, more than 90 percent of the Rohingya Muslims in Rakhine have fled their ancestral homes amid the government-sanctioned violence.

Meanwhile, Pope Francis has expressed sorrow over the plight of the Rohingya in Bangladesh.

“Two hundred thousand Rohingya children in refugee camps. They have barely enough to eat, though they have a right to food. Malnourished, without medicine,” he said.

The pontiff is scheduled to visit Myanmar at the end of November before moving on to Bangladesh.

Cypriot church calls for ‘devil’ Eurovision song to be scrapped 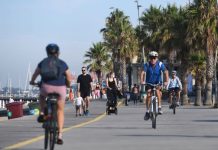