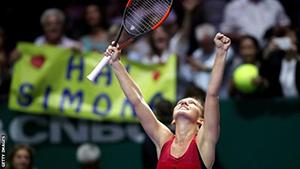 World number one Simona Halep and sixth seed Caroline Wozniacki both impressed in their opening round-robin matches at the WTA Finals in Singapore.

Denmark’s Wozniacki then beat Elina Svitolina of Ukraine for the first time in her career, coming through 6-2 6-0.

Garbine Muguruza and Karolina Pliskova both won in the White Group on day one.

Halep, who has yet to win a Grand Slam title, leads the WTA rankings ahead of Mugurzua, although seven of the eight finalists are able to finish the year as world number one.

Venus Williams will play Jelena Ostapenko in the White Group at 12:30 BST on Tuesday, followed by Wimbledon champion Muguruza against third seed Pliskova.

Halep’s meeting with Garcia, making her tournament debut, was highly competitive in the opening stages but ultimately saw Garcia’s 11-match winning streak come to an end.

Top seed Halep was forced to fend off two break points in her 15-minute opening service game and the pair exchanged breaks to make it 3-3 in the first set.

But world number eight Garcia, who had beaten Halep to win the China Open title earlier this month, double-faulted to hand her opponent a 5-4 lead and Halep never looked back.

A double break and hold to love earned her a 5-1 lead in the second set, and she went on to see out the match in one hour and 28 minutes.

“I’m really pleased,” said the 26-year-old. “It wasn’t an easy first match against a player that beat me two weeks ago. I felt really well out there.”

Wozniacki, a runner-up at the WTA Finals seven years ago, sits two places below world number four Svitolina in the rankings but looked in control from the outset of Monday’s second match.

The 27-year-old held to love in her opening service game and broke for a 4-2 lead, powering through 10 consecutive games to win in 58 minutes.

Wozniacki hit only five unforced errors, compared to 18 from Svitolina, who was making her debut at the season-ending finale.

“I played extremely well out there, I’m just really happy to be through this first match,” Wozniacki said.

“I tried to stay aggressive and go for my shots – it really worked for me today.”