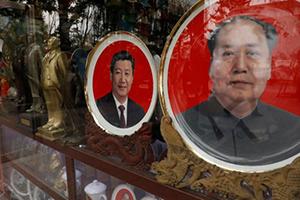 China’s Communist Party has voted to enshrine Xi Jinping’s ideology in its constitution, elevating him to the same level as founder Mao Zedong.

Mr Xi has steadily increased his grip on power since becoming leader in 2012.

The unanimous vote to write in “Xi Jinping Thought” took place at the end of the Communist Party congress.

More than 2,000 delegates have been meeting behind closed doors at the nation’s most important political meeting in Beijing.

The congress began last week with a three-hour speech by Mr Xi where he first introduced his philosophy called “socialism with Chinese characteristics in a new era”.

Top officials and state media then began repeatedly mentioning this ideology, calling it “Xi Jinping Thought”, in a sign that Mr Xi had cemented his influence over the Party.

Previous Chinese Communist Party leaders have had their ideologies incorporated into the party’s constitution or thinking, but none, besides founder Mao Zedong, have had their philosophy described as “thought”, which is at the top of the ideological hierarchy.

Only Mao and Deng Xiaoping have had their names attached to their ideologies.