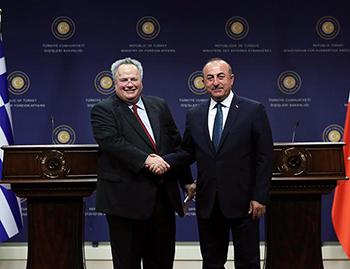 The minister said Turkey is “disappointed” after the Greek court ruled against extraditing eight Turkish soldiers accused of involvement in an attempted coup on July 15, 2016. He recalled that two of the soldiers that fled to Greece are suspects in a court case for attempting to assassinate President Recep Tayyip Erdoğan.

Those asylum seekers needed to be evaluated to determine those linked to the Gülen Movement, the network of the U.S.-based cleric Fethullah Gülen, whom Turkey accuses of masterminding the putsch.

Turkey is “still hopeful” for the return of the eight soldiers despite the “bad experience,” Çavuşoğlu said.

Hours after the attempted takeover that FETÖ has been held accountable for, the eight soldiers, including three majors, three captains and two sergeant-majors, fled to Greece’s Alexandroupoli in a Black Hawk army helicopter. The aircraft was returned the next day but the soldiers immediately requested asylum and stayed.

Greece’s Supreme Court on Jan. 26 ruled against the extradition request by Ankara, stating that the men would not get a fair trial in Turkey and that their lives would be at risk if they returned.

Kotzias said the decisions on asylum seekers were made by the Greek judiciary and had to be respected. The Greek minister stressed that he and his cabinet members were among the sufferers from coups in Greece.

The exploratory talks between Turkey and Greece, aimed at resolving the decades-long dispute over the official border between the two countries in the Aegean Sea, will resume according to Çavuşoğlu.