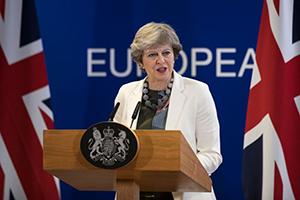 Negotiations must move to the next stage as soon as possible.

In view of the deepening Brexit gloom ahead of the meeting, last week’s amicable European Union summit was moderately encouraging: At least the talks didn’t break down. Both sides ought to understand, however, that when they meet next time, moving to actual trade negotiations is essential.

Instead of negotiating the shape of their future trade arrangements, Britain and the EU continue to dither over the size of the exit payment the U.K. owes the EU. Further delay serves neither side’s interests.

The other two items in the exit package — on which the EU wants “sufficient progress” before moving to the next stage — are the rights of EU citizens in Britain after March 2019 and the future of the Northern Irish border. These are complicated and important questions, but the interests of both sides are reasonably well aligned on these issues.

The settlement of financial liabilities is tougher, because the sides have staked out clear positions and they’re far apart.

Britain is talking about a payment of 20 billion euros ($23.5 billion), whereas the EU may have something closer to 60 billion euros in mind. There’s no right answer: Europe’s treaties don’t say how the liabilities of a departing member should be calculated. There’s scope for structuring a payment somewhat larger than 20 billion euros in ways that would make it easier for U.K. Prime Minister Theresa May to put before taxpayers. But if the EU takes a harder line, May’s government might be unable to deliver, and the talks could stay bogged down.

Rather than let that happen, Europe ought to allow the dispute over liabilities to go to independent arbitration — or agree to start the next phase of talks without resolving the issue of the size of the payment.

To be sure, it’s in Europe’s interests to drive a hard bargain: It has less to lose and a stronger negotiating hand. Even so, there’s a danger of miscalculating May’s capacity to make concessions. The recent election left her in charge of a minority government. After an accident-strewn performance at the recent Conservative Party conference, her premiership is fragile. The price of pushing her too hard might be a change of leadership or even a change of government.

Neither path would be certain to advance the EU’s goals in the talks; either would cause further delay and uncertainty. Plainly, the burden of that would fall mostly on Britain, but Europe’s producers and consumers also have an interest in an orderly transition to new trading rules. Achieving that should be the top priority — and there’s no more time to waste.