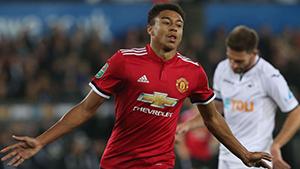 A review of Tuesday’s action in the Carabao Cup as holders Manchester United ease past Swansea, while Bristol City stun Crystal Palace.

Premier League strugglers Crystal Palace were dumped out of the Carabao Cup as Bristol City came from behind to win 4-1 at Ashton Gate.

Bakary Sako had put Roy Hodgson’s much-changed side, who are bottom of the top-flight table with just three points, ahead in the 21st minute.

However, Matt Taylor equalised in the 34th minute after a mistake from Patrick van Aanholt and City were in front five minutes later through a close-range finish from Milan Djuric.

Joe Bryan crashed home a third on the hour when his left-foot drive went in off the crossbar, with Callum O’Dowda knocking in a fourth six minutes later to compound a miserable night for the Eagles.

Lingard broke the deadlock in the 21st minute and then headed in a second on the hour as Jose Mourinho’s men looked to move on from Saturday’s Premier League defeat at Huddersfield.

Manchester City needed penalties to get past Championship pacesetters Wolves, winning the shoot-out 4-1 after a goalless encounter and extra-time at the Etihad Stadium.

The spot-kicks were taken on the ‘ABBA’ system, with Kevin De Bruyne and Yaya Toure both scoring to put City 2-1 ahead.

City goalkeeper Claudio Bravo then saved from both Alfred N’Diaye and Conor Coady to put the home side in the driving seat.

Leroy Sane converted, leaving Sergio Aguero to chip in a ‘Panenka’ and send Pep Guardiola’s side into the last eight.

Teenage striker Eddie Nketiah came off the bench to score twice on his home debut and send Arsenal into the quarter-finals at the expense of Norwich.

The England Under-19 international had played just a minute of first-team football for the Gunners before his introduction saw Arsenal come from behind and win 2-1 after extra-time.

Josh Murphy put Norwich ahead with a deft chip, his fourth goal in the competition this season, but the Canaries were guilty of wasting a host of chances to kill off the tie.

Nketiah, 18, then equalised with his first professional goal just 15 seconds after coming off the bench.

That sent the tie into extra-time, where Nketiah headed home to seal a memorable Emirates Stadium debut and put Arsene Wenger’s side into Wednesday’s quarter-final draw.

Bournemouth put their Premier League troubles to one side with a 3-1 home win over Middlesbrough.

Debutant Jack Simpson put the Cherries ahead four minutes into the second half, but Boro were level in the 56th minute through Marcus Tavernier.

However, Eddie Howe’s team – who picked up only their second league win when beating Stoke at the weekend – were strong during the closing stages as forward Callum Wilson, making his first appearance since January following a serious knee injury, slotted in a penalty in the 75th minute and Benik Afobe wrapped things up late on.

Managerless Leicester came from behind to beat Leeds 3-1 at the King Power Stadium.

Pablo Hernandez had put the Championship side ahead in the 26th minute but Kelechi Iheanacho soon levelled on the half-hour.

Islam Slimani gave the Foxes the lead in the 71st minute and a fine effort from Riyad Mahrez sealed victory with two minutes left.