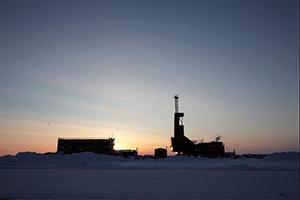 HOUSTON (Reuters) – Alaska is pursuing foreign investors for its oil and gas industry, hoping to advance recent discoveries while struggling to compete with lower-cost shale projects and reverse a decades-long output decline.

Alaskan crude production has fallen by three-quarters since 1988, a decline that has contributed to budget deficits and jeopardized the operation of the Trans-Alaska Oil Pipeline, which runs from the North Slope to the southern port of Valdez. This year, a state budget shortfall led the state to withhold hundreds of millions of dollars owed to small oil explorers.

But oil companies operating in Alaska say the state should fully fund its explorer-incentive payments that along with crude prices around $50 have put at risk projects on the North Slope and in the National Petroleum Reserve. Chinese capital for energy development also faces federal reviews that could block the state’s effort.

“It’s a challenging sell,” Hendrix said, adding that the proximity to Asian markets will boost the projects’ appeal to energy importers. “When you talk about (exporting) to the Far East, we’re closer than California.”

CIC and Sinopec expressed interest in an 800-mile proposed natural gas pipeline that would run from Prudhoe Bay to a southern port, as well as oil and gas production projects, he said.

Sinopec is talking with Alaska about a potential investment in the gas pipeline, said a source in China with knowledge of the discussions. Sinopec and CIC declined to comment.

Caelus, which disclosed a 6 billion-barrel North Slope oil discovery a year ago, delayed its drilling plans this summer, in part over the lack of incentive payments.

The state previously paid small companies for some costs of exploring and developing oil and gas projects, which are higher than in many other regions. This year, the state gave those companies only a portion, leaving hundreds of millions of dollars unpaid.

The reason small companies are struggling to attract outside capital is the decline in state incentive payments, said Kara Moriarty, CEO of trade group Alaska Oil and Gas Association.

Foreign investment can be reviewed by the Committee on Foreign Investment in the United States to ensure that it does not pose national security risks.

“I think it’s going to be very difficult for Chinese to make significant investments in energy in the United States,” one expert said.