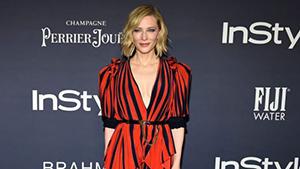 On Monday night at the InStyle Awards, freshly anointed 2017 “Style Icon” Cate Blanchett stood up with a message that cut through the pomp and aimed at the circumstance.

Though Harvey Weinstein’s name went unsaid during the glittery open-air evening at the Getty Centre, Blanchett subtly addressed one of the criticisms directed at women who have accused the movie mogul of harassment. She took the podium and outlined a reality in which women dress for themselves, not because they’re ‘asking for it.’

True icons of style, she said, are “women who know how they look is not all of who they are, but just an extension of that.”

The Thor: Ragnarok star continued: “It’s about women who feel free to wear what they want, when they want and how they want to wear it. I mean, you know we all like looking sexy but it doesn’t mean we want to (expletive) you.”

Blanchett couldn’t resist a political dig as she questioned the harsh criticism famous women receive on their looks.

“Women like looking sexy, but it doesn’t mean we want to f— you,” she said

“No one says to Steve Bannon: ‘You look like a bag of trash, do you want me to throw you out?’ But the comments that get said about what women wear on the red carpet — .” She sighed. “I mean, if you troll through those trolls on the Internet — just don’t.”

Most offered standard, often enthusiastic thank-you speeches, but it was Blanchett who charged the room with what it means to be called a style icon.

“For me, the true icons of style, it’s always those women who have been utterly themselves without apology,” she said, adding: “There’s iconoclasts.”

Blanchett has starred in Weinstein films including 2004’s The Aviator (for which she won a best supporting actress Oscar) and 2015’s Carol (for which she was nominated for best actress).

When stories detailing decades of alleged predation by Weinstein broke two weeks ago, Blanchett condemned the mogul’s alleged behaviour in a statement.

“Any man in a position of power or authority who thinks it’s his prerogative to threaten, intimidate or sexually assault any woman he encounters or works alongside needs to be called to account,” she said at the time. “It is never easy for a woman to come forward in such situations and I wholeheartedly support those who have.”