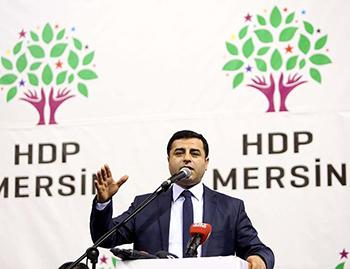 The European Council of Human Rights (ECHR) has prolonged the deadline it has given to Turkey regarding the application of jailed Peoples’ Democratic Party (HDP) co-chair Selahattin Demirtaş, as well as other HDP deputies, from Oct. 20 to Nov. 10.

Responding to the Ankara government’s request to extend the period by six weeks, the ECHR said the defense statement should be delivered by Nov. 10, it announced on Oct. 23.

The HDP on Feb. 20 filed an application at the ECHR regarding the continued arrest of Demirtaş and former HDP co-chair Figen Yüksekdağ. The HDP committee stated in the application that there is no way other than to apply to the ECHR, as Turkey’s Constitutional Court is not carrying out any examination.

The ECHR had marked the case of the HDP lawmakers as “urgent” and demanded that Ankara give statements on the arrest of the deputies on July 17.

The European Union on Feb. 23 criticized measures taken in Turkey against Yüksekdağ and Demirtaş.

“The measures taken against three Members of Parliament of the HDP, including both of its co-chairs, further add to concerns expressed both following the Turkish Grand National Assembly’s adoption last May of a law allowing the immunity of a large number of deputies to be lifted, as well as in the wake of ensuing detentions and arrests of several HDP Members of Parliament, including its two co-chairs,” read the statement released by the European Commission Spokesperson.

The statement also stressed the importance of “Turkey’s commitments and its status as a candidate country.”

“The full and effective participation of all democratically elected political parties in the legislature is an essential element of Turkey’s international commitments and its status as a candidate country,” it added.

Demirtaş was initially arrested as part of an investigation launched by the chief public prosecutor’s office in the southeastern province of Diyarbakır. The Ankara 19th Criminal Court later took over his case, setting Dec. 7 as the date for his first hearing.

Demirtaş has been under arrest since Nov. 4, 2016 in a prison in the northwestern province of Edirne and faces hundreds of years in jail over alleged links to the outlawed Kurdistan Workers’ Party (PKK), as well as other charges.

In addition to Yüksekdağ and Demirtaş, eight other HDP deputies are also currently under arrest.