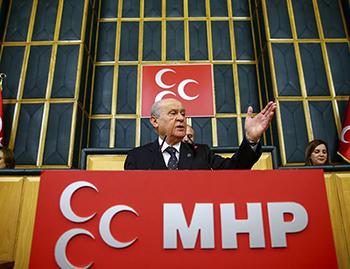 Hashd al-Shaabi (Popular Mobilization Forces) should not be active in Kirkuk in northern Iraq, Nationalist Movement Party (MHP) leader Devlet Bahçeli has said, calling for an autonomous status for the oil-rich province.

The security of Kirkuk should be in the hands of Iraq’s army and police forces, and the outlawed Kurdistan Workers’ Party (PKK) should be removed entirely from the province, he said at his party’s parliamentary group meeting.

Meanwhile, the MHP leader also criticized the United States for asking Turkish authorities to give back the phone of an arrested consulate employee, while urging Washington to extradite Fethullah Gülen, who is accused of masterminding the failed July 15, 2016, coup attempt.

“Give us the traitor and take your phone,” Bahçeli said.

Turkish authorities arrested Metin Topuz, a Drug Enforcement Administration (DEA) worker at the U.S. consulate in Istanbul, early in October. Washington had demanded the Turkish authorities give back his mobile phone and SIM card, saying it belonged to them.