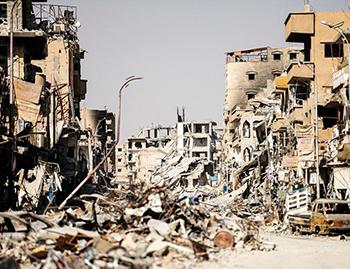 After losing major strongholds and key urban areas across Syria, including its self-proclaimed capital, the city of Raqqa, the Islamic State of Iraq and the Levant (ISIL) now controls only 5 percent of the country’s territory, according to Russia’s defense minister.

That’s a dramatic decline from the height of the rise of ISIL in 2014, when the extremist group seized about a third of both Syria and Iraq, before its downfall began.

The remarks by Defense Minister Sergei Shoigu came as Russia-backed Syrian troops are pushing deeper into the eastern Syrian town of Mehkan, one of the few still held by ISIL.

Speaking at a conference in the Philippines, Shoigu said on Oct. 23 that “terrorists” – a term the Syrian government and its allies use for all armed opposition – controlled more than 70 percent of the country before Russia launched its air operation at the end of 2015 to support President Bashar al-Assad’s offensive.

In Syria in 2015, ISIL briefly held nearly half of the country’s territory after the militants captured the historic city of Palmyra, parts of the northern town of Kobane, the central desert and reached the city of Hassakeh in the northeast.

Later that year, ISIL started suffering setbacks that culminated with the fall last week of the northern city of Raqqa. ISIL has also lost wide areas it once controlled in Iraq, including the northern city of Mosul, the largest city the group had ever captured. U.S.-backed Iraqi government forces retook Mosul in July.

Russia has played a main role in helping government forces capture wide areas from ISIL in northern and central Syria by giving them air cover. In September, Syrian troops and their allies reached the eastern city of Deir al-Zor, where the extremists had long besieged the government-controlled part of the city.

However, Raqqa fell last week to the U.S.-backed Syrian Democratic Forces (SDF), which is led by the Syrian Kurdish Peoples’ Protection Units (YPG).

Now, with the ISIL “caliphate” rapidly crumbling, a race is on between the U.S.-backed forces and the Syrian government troops in the oil-rich Deir al-Zor province.

Syria’s state TV said warplanes of the U.S.-led coalition have bombed a government-controlled neighborhood in the city of Deir al-Zor, the provincial capital, killing 14 civilians.

U.S. military spokesman Col. Ryan Dillon denied the report, tweeting that the coalition has not bombed the city, of which ISIL currently controls a small part, since September.