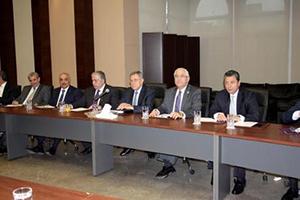 Al-Mustaqbal parliamentary bloc on Tuesday warned that Iran is seeking to impose “hegemony” on Lebanon and the region.

“President Rouhani’s arrogant and insolent remarks are totally rejected and Lebanon is an independent Arab state that rejects any hegemony and any insult against its dignity,” Mustaqbal added in a statement issued after its weekly meeting, echoing similar remarks by Hariri.

“It has become evident that Iran is seeking to impose its control and hegemony over Lebanon and the region, which was reflected in the remarks of several Iranian officials over the past few years, the last of which were voiced by President Hassan Rouhani, whom we used to deem as moderate and open-minded,” the bloc went on to say.

Rouhani said Monday that Iran’s position in the Middle East had never been stronger.

“In Iraq, Syria, Lebanon, northern Africa, in the Persian Gulf region — where can action be taken without Iran?” he added.