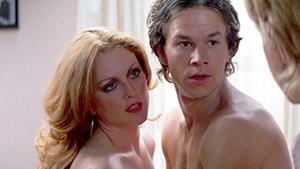 We’ve all done something we regret.

The blockbuster darling is so remorseful about his role in the critically-acclaimed film that he has even asked for divine intervention to help clear his conscience.

“I just always hope that God is a movie fan and also forgiving, because I’ve made some poor choices in my past,” he told a Catholic conference in Chicago. “Boogie Nights is up there at the top of the list.”

It’s unclear whether Wahlberg regrets doing the film because he thinks God would frown upon its titillating themes, or whether he just thinks it’s a terrible flick.

Either way, the movie was a commercial success – scooping up more than $US40 million at the global Box Office and debuting to largely positive reviews that praised the movie’s characters and bold themes.

During the Q&A session, Wahlberg also opened up about some of the other big regrets from his life, according to the Chicago Tribune.

When he was a teenager, the now-movie star served 45 days in prison for bashing two Vietnamese men while shouting racial slurs. As a result of the attacks, one of the men was left permanently blind in one eye.

“I’ve never been shy about sharing my past and the bad decisions I’ve made and being affiliated with gangs, being incarcerated,” he said.

“That’s why I’ve continued to try to do as much as I can to help young people. It’s one thing to give money, or to start programs, but to be there and be able to talk to them, and tell them there is someone who has been through the same things they are going through and was able to turn their life around, and turn it into a big positive. That’s always important.”

It’s not the first time Wahlberg has asked for forgiveness over one of his eyebrow-raising films. In 2015, the actor jokingly asked the pope for a pardon over his 2012 comedy film Ted, according to USA Today.

“Holy father, please forgive me,” he said at the time. “I’ve always hoped that the Good Lord has a sense of humour.”

Wahlberg was raised a Roman Catholic and has regularly attended church. He’s previously said religion was the most important part of his life.