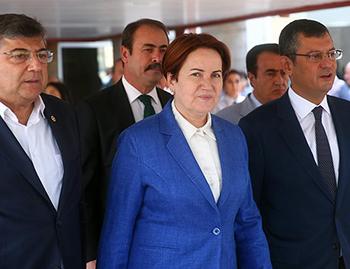 Meral Akşener, a prominent former deputy of Nationalist Movement Party (MHP), is set to submit an official application to the Interior Ministry for the foundation of a new political party on Oct. 25.

Following the application signed by 210 founders, Akşener will make a public announcement, where she will also declare the name of the new party, which is not expected to have a parliamentary group in parliament as the regulation requires at least 20 seats.

The new party will elect its ruling bodies before a scheduled visit to Anıtkabir, the mausoleum of Turkey’s founding father Mustafa Kemal Atatürk.

Despite Akşener’s MHP roots, her movement has vowed to present a broad church, positioning itself in the center-right of the country’s political spectrum.

Aytun Çıray, a main opposition Republican People’s Party (CHP) deputy for the western province of İzmir, resigned from the CHP on Oct. 23 in order to join Akşener’s team.

Media reports have also suggested that former state minister Ayfer Yılmaz and former lawmaker Ahad Andican will join the party on day one.

“We define ourselves as a central party. In other words, a party that invites all patriots either on the right or left of center is emerging,” Özdag told Hürriyet back in August.

The to-be-founded party has pledged to lift the ongoing state of emergency in its program, which also envisages “a return to the parliamentary system and the principle of separation of powers.

“The election threshold will be reduced to 5 percent [from the current 10 percent],” said the program, which was made public in October.

Sources said the party administration will pick only 30 of its lawmaker candidates and let the remaining 570 be elected by party members.

The party administration will not be able to select any candidates in smaller provinces.

It will also reportedly reserve a minimum 25 percent quota for women in administrative committees.

A split in the MHP during the April 16 constitutional referendum on shifting to an executive presidential system sped up the foundation of the new party, after MHP head Devlet Bahçeli supported the changes pushed by President Recep Tayyip Erdoğan.

Despite splits in the MHP, the party’s official backing helped the “yes” campaign secure a narrow win in the referendum. Akşener and her followers campaigned for a “no” vote and have accused Bahçeli of standing too close to the government.