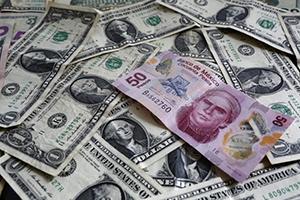 MEXICO CITY (Reuters) – Mexico has no objection to any pledge with its NAFTA partners aimed at preventing currency manipulation, as long as it does not affect domestic monetary policy, Mexican Economy Minister Ildefonso Guajardo said on Tuesday.

Mexico, the United States and Canada are in the midst of tough talks to renegotiate the North American Free Trade Agreement (NAFTA), with the latest round of formal discussions scheduled to take place in Mexico City next month.

The U.S. Trade Representative’s office wants a provision to deter currency manipulation as part of the NAFTA renegotiation. In a hearing at Mexico’s lower house of Congress, Guajardo said his government had “no problem” with that proposal.

“However, that can’t affect the conduct of monetary policy,” Guajardo told lawmakers.

The minister later told reporters Mexico needed to define its positions for the next session of talks after the United States made a series of proposals that were met with stiff resistance during the previous round in Washington.

“Mexico must set out all its proposals and respond to the ambitions of our trade partners on every issue,” he said.

U.S. President Donald Trump has threatened to pull out of the accord if he cannot renegotiate it to the advantage of the United States, arguing it has cost U.S. manufacturing jobs and caused a goods trade deficit of over $60 billion with Mexico.

However, the Mexican government has repeatedly said a reworked NAFTA must also be in the interests of Mexico, and that the country will walk away from the talks if Trump triggers the process of exiting the 23-year-old agreement.

Guajardo said if NAFTA did unravel, farm produce and petrochemicals would be the most affected imports into Mexico, and that the country needed to be clear about what alternative markets it could tap if necessary to face the challenge.

Last week negotiators from Mexico, Canada and the United States agreed to extend the NAFTA talks into the first quarter of 2018. After that period, formal campaigning to elect Mexico’s next president will begin in the run-up to a July vote.

If NAFTA was on the agenda of the early presidential hopefuls, it was healthy for Mexico, Guajardo added.

Turning to the Trans-Pacific Partnership, a Pacific region trade deal finalised in 2016 that Trump pulled out of after taking office, Guajardo said it was important that the remaining 11 signatories laid the foundations for the accord in case a future U.S. president had a change of mind about it.