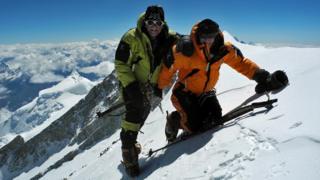 Husband-and-wife mountaineering team Romano Benet and Nives Meroi were attempting a winter ascent of the world’s fifth-highest mountain, Makalu, when things went badly wrong. It was the first of two serious challenges that could have brought their climbing careers, and even their lives, to an end.

The biggest problem on Makalu was the freezing wind.

Considered one of the most difficult mountains in the world to climb, in early 2008 a relentless gale was making it almost impossible.

Two years before, French mountaineer Jean-Christophe Lafaillle had died trying to make a winter ascent. But Benet and Meroi, and their Italian companion Luca Vuerich, had not yet given up hope of success.

“For a month the gusts knocked us from here to there, and we couldn’t even sleep at night,” Meroi remembers.

“Instead, the jet stream exploded in a furious crescendo,” Meroi says.

“We were running for our lives, when a gust of wind picked me up.

“My feet lost their grip on the gravel, I slipped between two big boulders and I fell, with my body twisting on my trapped foot.

“The wind continued to howl while I heard the sharp sound of my bone snapping.”

With a broken leg, she could not move unaided.

So for two days Benet and Vuerich took turns to carry her on their shoulders. They walked through fog and along a glacier to reach Camp Hillary at 4,860m (16,000ft) where a rescue helicopter was able to pick them up and fly them to Kathmandu.

“Despite 40 years of climbing we still fear the mountains,” Meroi says.

The following year, when Meroi’s leg had healed, the couple to set out to climb Kangchenjunga, the world’s third-highest mountain, which straddles India and Nepal. They were closing in on the 8,586m summit when Benet felt unwell.

“I was tired and slower than usual so I decided to stop, but I told Nives to continue,” he says.

If Meroi had climbed the remaining few hundred metres to the summit, she would have stood a good chance of becoming the first woman to climb all of the world’s 14 peaks above 8,000m (26,247ft). But she didn’t think twice about turning round.

“When I realised there was something wrong with Romano I decided to descend as fast as we could,” she says.

“I thought, ‘What’s the point of me going up there alone?’ If Romano had waited in the tent at 7,600m while I was trying to climb to the top I might not have found him alive when I came back.”

Benet was eventually diagnosed with aplastic anaemia, a very rare and potentially life-threatening condition in which your bone marrow fails to produce enough new blood cells.

The couple refer to this as their 15th eight-thousander, and the most difficult one.

“If it wasn’t for the difficult situations that we had experienced in the mountains, I don’t think I would be able to bear all this,” Benet used to tell Meroi during the months of his illness.

He was to undergo nearly two years of treatment, including dozens of blood transfusions.

“Mountaineering is about facing one problem at a time, and about knowing that every step forward is a step we’ll have to take coming back down,” Meroi says.

“We like to think that climbing mountains gave us the skills to face the disease. It taught us to place one step after the other, to be patient, and to never give up.”

But every therapy that the doctors tried on Benet failed. Their last hope was to give him a bone marrow transplant. Finally a matching donor was found and the transplant was carried out. But it didn’t work.

“The doctors had run out of ideas,” Meroi says. “But then they decided to experiment with something new – in mountaineering terms, to open a new route.”

They thought a second bone marrow transplant from the same donor might just work, even though the first had failed.

“The person who had donated the bone marrow in the first place was asked to go through the entire process for a second time,” Meroi says. “And, bless him, he agreed to do that.”

“That’s what brought Romano back to life. To this day we don’t know who this person is, but his silent and generous act really gives us hope in humanity.”

It wasn’t only the anonymous donor, Benet says, who helped him to overcome his illness.

“For two years Nives was the best partner I could imagine,” he says. “She never left my side. We approached it as we always do, as a team, roped together.”

A few years later, Benet and Meroi put on their backpacks again and returned to Kangchenjunga for another attempt.

“I was so thrilled to be back on the mountains – it was like unleashing a chained dog,” Benet remembers.

But in their excitement to be back in the mountains the pair accidentally climbed up the wrong gorge.

“I think we are the first mountaineers in the history of the Himalayan ascents to get the wrong peak,” Benet says. “But for me being there and knowing that I could still make it was enough.”

In 2014 they returned to Kangchenjunga for a third time.

“That time we got the right mountain,” Meroi says. “We were the first climbers of the season, so we had to open the route. It was just the two of us, but when we got to the top we realised we weren’t alone – the anonymous donor was up there with us, the young man without a name who had chosen to give a stranger a chance of life. We wouldn’t have made it without him.”

Although Meroi missed out on being the first woman to climb all of the eight-thousanders, in May this year she and Benet became the first couple to climb all 14 – an achievement all the more notable for their method of climbing without Sherpas or bottled oxygen.

This brings with it real dangers.

Beyond 2,400m, the human body becomes susceptible to altitude sickness, which can progress to life-threatening conditions including high-altitude pulmonary oedema (HAPE) or high altitude cerebral oedema (HACE), when blood vessels begin leaking fluid into the lungs or brain.

By the time you reach 8,000m you have entered the “death zone”, where the air is so thin it is insufficient to sustain human life.

“The human body is not designed to live at those altitudes – even a tiny problem can escalate very quickly,” Meroi says. “And it’s not just a physical challenge – even thinking about your next move is tiring.”

The couple often climb during the night so that they can arrive at a mountain’s summit just after dawn, meaning they can make their descent – which technically can be more difficult and dangerous than the ascent – in daylight.

“When you climb at night you’re guided by the light of the stars and sometimes it feels like you’re actually above them,” Meroi says.

“And when you get to the top the first thing you experience is a sense of elation,” says Benet.

“The view from the top of an eight-thousander is something you’ll never forget because from up there you can actually see the Earth curving at the horizon.”

For Meroi, reaching the summit of one of the world’s highest mountains gives her a different perspective on life.

“You really get a sense of how fragile human life is and how small it is compared to the power of nature, and you realise that the ambitions that drive us mad at sea level are completely irrelevant up there,” she says.

“I feel like I am at peace with nature and that’s probably what makes me want to keep climbing, to find that feeling again.”