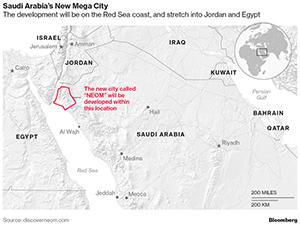 Saudi Crown Prince Mohammed bin Salman announced plans to build a new city on the Red Sea coast, promising a lifestyle not available in today’s Saudi Arabia as he seeks to remake the kingdom in a time of dwindling resources.

The prince said the city project, to be called “NEOM,” will operate independently from the “existing governmental framework” with investors consulted at every step during development. The project will be backed by more than $500 billion from the Saudi government, its sovereign wealth fund and local and international investors, according to a statement released on Tuesday at an international business conference in Riyadh.

The new project will likely surprise investors still trying to take stock of a series of major announcements made by the prince during his meteoric rise to power as he seeks to prepare Saudi Arabia for the post-oil era. In less than two years, he’s revealed plans to sell a stake in oil giant Saudi Aramco and create the world’s largest sovereign wealth fund, and has ended a long-standing ban on female drivers.

The prince, 32, made a rare public appearance at the conference to promote the project, telling the bankers and economic policy makers in attendance that the kingdom is moving to a “new generation of cities.” NEOM will be powered by clean energy, he said, and will have no room “for anything traditional.”

It will likely be met with the same mixture of optimism and doubt that has greeted his previous headline-grabbing announcements. His supporters can be expected to cheer what they see as a bold drive to transform the kingdom, while others will point to past failed attempts to overhaul the Saudi economy that also included industrial cities in the desert.

The ambitious plan includes a bridge spanning the Red Sea, connecting the proposed city to Egypt and the rest of Africa. Some 10,000 square miles (25,900 square kilometers) have been allocated for the development of the urban area that will stretch into Jordan and Egypt.

Klaus Kleinfeld, the former chairman and chief executive officer of Siemens AG and Alcoa Inc., was appointed to lead the development of NEOM. SoftBank Group Corp.’s Vision Fund on Tuesday signed an initial agreement with the kingdom’s wealth fund to buy a “significant” stake in state-controlled Saudi Electricity Co., and will provide energy for the new city. Saudi Arabia this year agreed to become a cornerstone investor in the Vision Fund.

The project “seems to be broadly modeled on the ‘free zone’ concept pioneered in Dubai, where such zones are not only exempt from tariffs but also have their own regulations and laws, hence operating separately from the rest of government,” said Steffen Hertog, a professor at the London School of Economics and longtime Saudi-watcher. “In Dubai, this has worked well, but attempts to copy it have done less well in the region.”

A promotional video released on Tuesday features a lifestyle so far unavailable in Saudi cities. It showed women free to jog in leotards in public spaces, working alongside men and playing instruments in a musical ensemble. The one woman wearing a hijab had her head covered with a patterned pink scarf.

The kingdom has already announced a plan to transform hundreds of kilometers of Red Sea coast into a semi-autonomous world-class tourism destination and governed by laws “on par with international standards.”

The unveiling of the new project comes as Saudi officials, almost two years into the latest reform drive, are still grappling with how to speed up change without crippling the economy and clashing with the kingdom’s conservative religious establishment.

The world’s biggest oil exporter wants to overhaul the economy while creating enough wealth to avoid the risk of social unrest. Similar efforts over the past three decades have floundered, with plans losing steam as soon as crude prices recovered. Some landmark projects, such as a $10 billion financial district in Riyadh, are struggling to take off.

“Saudi Arabia has announced a number of mega-projects recently, but what investors will ultimately look for is greater details, progress with plans and initial investment,” said Monica Malik, chief economist of Abu Dhabi Commercial Bank. And while the planned, more liberal, regulatory framework for the city “could be positive for streamlining investment,” it didn’t gain traction with previous economic cities developed in the kingdom, she said.

Prince Mohammed, who became heir to the throne this summer after his older cousin was removed from office, has vowed not to repeat past mistakes, insisting that his Vision 2030 will proceed regardless of oil prices. His government has cut subsidies, slashed spending to trim the budget deficit and it plans to introduce value-added taxation next year to raise non-oil revenue.

Hertog said investors will want to see whether “circumventing some of the slow mainline bureaucracy and general social restrictions in Saudi Arabia in a special zone” can work. “If this is to be an international hub, it needs to offer something better than Dubai, which is a high bar to cross,” he said.

The crown prince indicated he understood the challenge. “Dreaming is easy, achieving it is difficult,” he said.