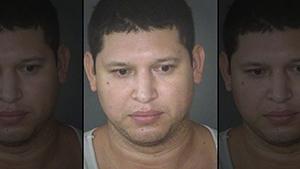 A man in Texas was arrested Sunday after a video of him reportedly raping a 7-year-old girl was uncovered by the victim’s mother.

Police arrested Jose Trinidad Gonzalez, 35, after the victim’s mother reported finding a video of the alleged rape on his tablet, the San Antonio Express-News reported.

The victim and her siblings, who reportedly knew Gonzalez, would use his tablet on occasion. Their mother said she decided to log on because she wanted to see what games they were playing.

While she was on it, she told police she opened the “deleted photos” folder and found a picture of her child’s genitals, as well as a video showing Gonzalez raping the girl, the Express-News said.

The woman immediately notified police and Gonzalez was arrested. He remained in jail on Tuesday on a $150,000 bond.

Gonzalez was charged with aggravated sexual assault of a child and possession of child pornography, according to the report.

The names of the mother and child, as well as their relationship to Gonzalez, have not been released due to the type of crime, the Miami Herald reported.