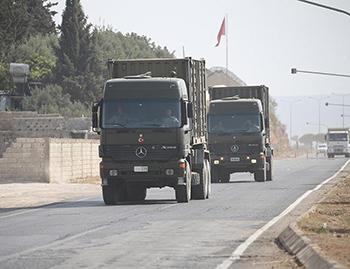 The Turkish Armed Forces’ (TSK) operation in Syria’s Idlib province is almost complete and the next military offensive could target Afrin, President Recep Tayyip Erdoğan has said, referring to the canton of Syria under the control of the Syrian Kurdish People’s Protection Units (YPG).

“Our operation in Idlib is nearly complete. Ahead of us is Afrin. These are threats to us and we will never make concessions to such threats,” Erdoğan told the parliamentary group of his Justice and Development Party (AKP) on Oct. 24.

Turkey launched the operation in Idlib on Oct. 8 as part of the three-way Astana Process deal with Russia and Iran aiming to establish de-escalation zones in Syria. The army had announced on Oct. 13 that it had set its first observation spot in the neighboring country, the first of an expected total 14 spots to monitor the ongoing ceasefire between the Syrian regime and opposition groups.

He also repeated his strongly worded criticisms against the United States over its support to the YPG, implying that the group has taken control of oil wells in southern Syria with the help of the U.S.

“Some 25 percent of Syria is under the control of the YPG, while 10 percent is under the control of Daesh [Arabic acronym for the Islamic State of Iraq and the Levant – ISIL]. The Syrian regime has control over only less than half of its territories despite Russia’s strong support,” Erdoğan said, while adding that moderate Syrian opposition groups controlled 20 percent of Syrian territories.

“Now I ask: To whom will a disintegrated, dissolved Syria serve? Surely not the Syrian people,” he said.

Reiterating Ankara’s anger over the U.S.’s continued support to the YPG, particularly after the group raised PKK flags and the posters of its imprisoned leader, Abdullah Öcalan, in Raqqa, Erdoğan said: “How will you explain this, America? We told you, but you did not believe us. Everything is now obvious.”

Erdoğan also questioned the arms supply to the YPG and asked whether all these weapons transferred to the group on 3,500 trucks have been used against ISIL or not. “We know very well where these weapons are being stocked. We know all these and you should also know it,” he said.