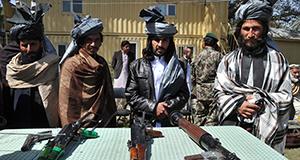 The US has extended an invitation to some members of the Taliban to negotiate and join the Afghan government.

“We have to continue to fight against the Taliban, against others, in order for them to understand they will never win a military victory,” US Secretary of State Rex Tillerson told reporters in Doha Monday. He added, however, that, “there are, we believe, moderate voices among the Taliban, voices that do not want to continue to fight forever… So we are looking to engage with those voices and have them engage in a reconciliation process leading to a peace process and their full involvement and participation in the government.”

Counterterrorism expert Max Abrahms told Sputnik News that it is false to conclude that the Taliban will fail against the foreign occupation, and that in fact the Taliban “is not showing signs of weakness,” pointing out that they have been gaining territory. “The notion that we’re going to turn the tide doesn’t seem realistic,” Abrahms added.

“There’s a place for them in the government if they are ready to come, renouncing terrorism, renouncing violence and being committed to a stable prosperous Afghanistan,” Tillerson said.

The main reason for offering the Taliban a seat at the diplomatic table in joining Kabul’s government is to help the US “graciously” exit, the Council on Foreign Relations member said, if indeed the US ever does leave the Central Asian nation.

In February, Afghan political analyst Seyed Ishaq Gilani told Sputnik News he was skeptical about the future of Kabul-Taliban relations. “The presence of foreign military forces did not meet our expectations. The international community pledged a lot but failed to deliver. And neither the authorities nor those backing the Taliban managed to hammer out a full-fledged peace program” during prior talks, the analyst said.

Tillerson also made a point of criticizing the Pakistani government ahead of a Tuesday visit to Islamabad. “Pakistan needs to, I think, take a clear-eyed view of the situation that they are confronted with in terms of the number of terrorist organizations that find safe haven inside Pakistan. So we want to work closely with Pakistan to create a more stable and secure Pakistan as well,” the former ExxonMobil chief executive said.