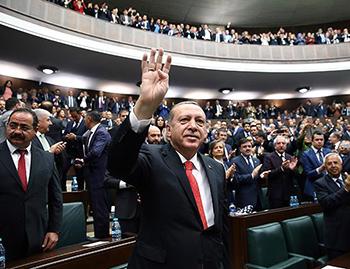 President Recep Tayip Erdoğan has said Turkey has an “obese” administration, commenting on what he calls “renewal” attempts within the ruling Justice and Development Party’s (AKP).

“We have to admit that we have an ‘obese’ state, despite reforms that we have realized over the past 15 years,” Erdoğan said during the weekly meeting of the ruling Justice and Development Party (AKP) in parliament on Oct. 24.

A great and strong state is different from an “obese, bulky and ineffective” state, he added.

“Our state will be great. But we must save our state from obesity, which causes bulkiness, loss of time and many other illnesses,” Erdoğan said, stressing that the party should focus on “continuing reforms” on the eve of local and general elections in 2019.

The president has repeatedly said the AKP needs to guard against what he calls “metal fatigue.”

Referring to the upcoming “harmonization” laws for legal changes following a constitutional change in April that shifted Turkey to an executive presidential system, Erdoğan said the changes are “an opportunity … to make a big contribution to the country’s history.”

The main opposition Republican People’s Party (CHP) will be the “main obstacle” in such an attempt, he added.

“The current situation of the main opposition party is good news for us but it is unfortunate for the country,” Erdoğan said.

“We now have to compete with ourselves, not the main opposition, in all fields including elections and projects,” he added.

President Erdoğan also accused the CHP of “keeping the Constitutional Court busy for pointless reasons,” referring to a controversial code recently passed by parliament as part of an omnibus law granting local religious authorities the right to conduct marriages.

“You will be uncomfortable if you try to use secularism as a shield against the values of the nation and history. Secularism, which is supposed to ensure the impartiality of the state regarding religious beliefs, is a concept that we accept and consider necessary,” he said.

Meanwhile, the Turkish president also again criticized the U.S. for issuing arrest warrants against his security guards over a brawl that erupted with protestors during his visit to Washington in May.

“You are only strong enough to issue arrest warrants for 13 of my security guards, most of whom have never even been to America before,” said Erdoğan.