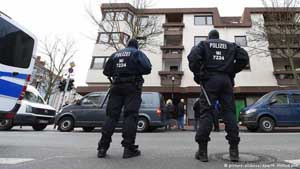 Only better integration options will reduce the risk of increased crime rates among migrants, a study has found. The study also linked a rise in crimes Lower Saxony with an increase in migrant arrivals.

The study, released to news agency dpa and carried out by criminologists at the Zurich University of Applied Sciences at the behest of the German Family Ministry, researched the increase in violent crime recorded in Germany over the past two years.

The study also suggested a link between an increase in reported violent crimes in Lower Saxony and a significant increase in migrant arrivals in the state.

The study also pointed out that a third of all victims of crimes committed by refugees are other refugees. “There will also be a significant number of unknown cases here,” Kliem told DW in an email. “These people also deserve our full attention. Especially the particularly vulnerable group of refugee women and children.”

Creating incentives — to stay or leave

The authors suggested a range of incentives that could help refugees to integrate – or to leave the country if their immigration status meant they were unlikely to be granted permanent residency. “For this it would be advisable to invest public money that could help those affected to promote their professional qualifications,” said Kliem. “At the same time money should be invested in development aid in the countries of origin so that people a) are not driven to flee and b) the returnees do not lack prospects in their home countries.” Kliem also stressed the need for a new immigration law that would clarify who could enter the country and for what purpose.

But Baier also underlined that the study’s conclusions didn’t mean that the state should simply throw more money at the problem. “At the end of the day it’s society itself that is being challenged to integrate refugees on this scale,” he said. “We’ve already seen a lot of this: families looking after individual refugees, volunteers joining help organizations.”

But this “total society” approach also brought its own problems. “What we know is that many these volunteers are often not well-supported,” Baier added. “People need a certain preparation for the task of helping refugees integrate – and I think local governments could help there – maybe something like a short introduction from social workers.”

Another contributing factor was the age of the migrants. According to the study, men between the ages of 14 and 30 are more generally more likely to commit violent crimes than those in other age brackets.

The study said the 14 to 30 age bracket formed the largest of its kind for migrants in Lower Saxony, suggesting that in turn contributed to the link between the rising rate of violent crime and the increase in migrant arrivals in the state.

The authors also noted that there was a significant difference in the criminal migrants’ country of origin, saying men from Syria, Iraq and Afghanistan were significantly less likely to commit a violent crime than those hailing from North Africa.

Another contributing factor to the rise in crime was the lack of women among the refugees – overall, the researchers found that less than a quarter of refugees were women, which was leaving many refugees left in groups of men without their wives, mothers, or sisters. The study found that this increased the danger that men were “orientating themselves towards violence-legitimating manliness-norms.”

“From criminological research we know that one reason why young men grow out of criminality is because they start families, or have steady relationships,” Baier added.

One of the authors argued that this was one reason why Germany should aim to reunite more refugee families  by flying in the wives, siblings, and children of refugees already here. The German government recently suspended this policy. “Stopping family reunification already seems questionable from an ethical and a constitutional perspective,” Kliem said. “But from a criminological perspective there is a lot that speaks in favor of family reunification. An intact family is an important protective factor for many areas of life, and certainly also for successful integration.”

The findings reflect earlier reporting that violent crime had increased significantly during the migration crisis. However, other studies have refuted links between increased crime rates and migrants

Since 2015, more than one million migrants have arrived in Germany, many of them fleeing war and extreme poverty in the Middle East, Asia and Africa.

The increased arrival of migrants in Germany was in part due to German Chancellor Angela Merkel’s open door policy towards Syrians fleeing a devastating war in their country that has killed more than 300,000 people and displaced roughly half the population.