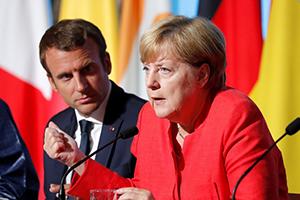 Monday’s simultaneous session of the French and German parliaments is set to commemorate 55 years of the Elysee Treaty and bring closer cooperation between both nations. But as always, the devil is in the details.

Four months since Germany’s parliamentary elections, and the country is still without a new government. Until now, parliament has been unable to properly get to work. Despite this period of uncertainty, members of parliament want to send an important foreign policy signal.

A majority in the German Bundestag has passed a resolution calling to deepen ties with France and to draw up a renewed Elysee Treaty, a step made to commemorate and build upon the 55th anniversary of the friendship treaty between the neighboring countries. To mark the accord, a simultaneous session of the French and German parliaments convened Monday morning.

But the parliamentarians don’t intend to simply substitute the existing treaty which, in a nutshell, obliges French and German governments to cooperate more closely.

Instead, they seek a “new political commitment” to Franco-German cooperation, says Christian Democratic Union (CDU) MP Andreas Jung, who heads the Franco-German parliamentary group and helped devise the resolution that is supported across the political spectrum, and also by a majority of delegates in the French National Assembly

“Stronger if we work together”

The resolution signals to Macron that Germany shares the French desire for European reforms and closer cooperation between both countries. It urges both governments to pursue a number of Franco-German projects and enumerates areas that for years have been on their shared agenda. These include Franco-German vocational training centers and a greater number of bilingual school classes, as well as plans to improve infrastructure in the Franco-German border region and to closely cooperate on all things digital. A joint artificial intelligence research center has also been suggested.

Jung is especially optimistic about future economic cooperation between both nations. “For the first time, we now have a commitment to a Franco-German economic realm. It goes beyond the single market and encompasses shared commercial law, insolvency law and a harmonized corporate tax rate. This is a clear commitment that we’re stronger if we work together,” Jung told DW.

It remains unclear whether the German parliamentary resolution will have the intended effect, however. “We’ve made the effort and examined all previous Franco-German declarations of intent. Only a fraction of promises were kept, which could be cause for frustration,” cautioned Frank Baasner, who heads the Franco-German Institute (DFI) in Ludwigsburg. Some of the projects advocated now were already proposed in previous declarations. For instance, Chancellor Merkel and former French President Nicolas Sarkozy had already agreed in 2011 to harmonize the corporate tax rate in both countries. Their ambitious goal was to implement this change by 2016. A new target date hasn’t yet been set.

The latest Franco-German declaration for a joint artificial intelligence research center can be seen as an extension of an initiative first agreed in 2005 by Germany’s former Chancellor Gerhard Schröder and France’s then-president, Jacques Chirac. The two agreed to create a Franco-German search engine (“Quaero”) as an alternative to Google, but Germany pulled out of the project just one year later.

Even if the agreement is working with previously discussed topics, Frank Baasner welcomes the parliamentarians’ enthusiasm. He is convinced that some projects simply need to be put on the agenda again and again to succeed. Baasner gives an example: “The Franco-German University was based on an old idea that never worked out. But now, they have created a remarkable umbrella organization enabling numerous French and German higher education institutions to successfully cooperate in all research areas.”

Baasner identifies three areas that are particularly suited to closer cooperation between France and Germany: defense, corporate taxation, and mobility. Following Donald Trump’s election as US president, cooperation over arms and defense issues gained momentum in Europe, with 23 out of 28 EU member states agreeing to work together more closely. Baasner thinks France and Germany can act as pioneers in this field and set an example. But, as always, the devil is in the details: France has a history of sending its troops abroad, whereas Germany is very reluctant to do so. And human rights activists are concerned that intensified cooperation on arms projects could undermine Germany’s strict rules governing weapons exports. Accordingly, they are critical of the merger of German tank builder Krauss-Maffei Wegmann with its French competitor Nexter Defense agreed in 2015.

Intensified Franco-German cooperation among parliamentarians is also on the wish list. Even though both sides must rely on interpreters to communicate, the aim is to hold more joint parliamentary committee meetings. The idea is also to strengthen Franco-German dialogue and devise joint solutions to European challenges. Despite the challenges, the path toward these moves looks smooth, as the revised Franco-German parliamentary agreement does not even require the consent of either government.