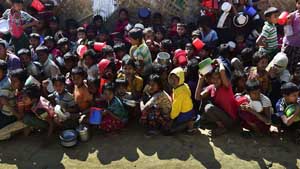 Bangladesh has postponed the gradual repatriation of hundreds of thousands of Rohingya Muslims to Myanmar, which was slated to being Tuesday, amid concerns that the refugees could be coerced into leaving.

“We have not made the preparations required to send back people from tomorrow (January 23). A lot of preparation is still needed,” Bangladesh’s Refugee Relief and Repatriation Commissioner Abul Kalam announced on Monday.

“The main thing is that the process has to be voluntary,” said Azad, adding that paperwork for returning refugees had not yet been finalized and transit camps had yet to be built in Bangladesh.

He did not give a new date for the start of the repatriation process.

His announcement came amid widespread fears that repatriated refugees need guaranteed security otherwise they would be forced to return to Bangladesh by Myanmar, which has been involved in a bloody campaign of violence against its minority Muslim community based in Rakhine State.

The United Nations and human rights advocates have described the “systematic policy” against Rohingya Muslims in Myanmar as “ethnic cleansing” and “genocide.”

Rohingya Muslims have long been treated as outsiders in the Buddhist majority Myanmar and are viewed as illegal immigrants from Bangladesh, even though generations of Rohingya have lived in Myanmar.

Nearly all have been denied citizenship since 1982, effectively rendered stateless.

In early January, following up on their November 2017 agreement, Bangladesh and Myanmar signed a deal to begin sending back the refugees starting January 23. Officials had said they expect some 1,500 refugees to go back each week, though only refugees with identity documents — which most Rohingya lack — will be allowed into Myanmar.

Bangladesh and Myanmar are both eager to have the repatriations begin.

Bangladesh has grown weary of hosting Rohingya whove spilled across the border for decades. More than a million Rohingya are now believed to be living in Bangladesh. Myanmar, meanwhile, wants the repatriations to lessen the international condemnation it has faced for the violence.

Eventually, the more than 650,000 Rohingya who have fled Myanmar since August, when Myanmar’s military, backed by Buddhists, launched a fresh wave of state-sponsored crackdown campaign against the Muslims in Rakhine.

Sayed Noor, a Rohingya Muslim who fled his village in Myanmar last August, said his fellows must be recognized as Myanmarese citizens for them to be able to return.

Myanmar authorities “have to give us our rights and give us justice,” Noor said.

“They will have to return all our wealth that they have looted and hold people accountable. They will have to compensate us. We came here because we are fighting for those things,” he said. “If we don’t get all of this, then what was the point of coming here?”

David Mathieson, a longtime human rights researcher who has spent years working on Rohingya issues, was also pessimistic about the repatriation deal even before the latest announcement.

“It’s a fantasyland, make-believe world that both governments are in,” he said in an interview in Yangon, Myanmar’s main city, noting that military forces there had just forced hundreds of thousands of Rohingya across the border.

“Now you’re expecting them to come back, as if they’re in a conga line of joy after what you did to them?” he asked.