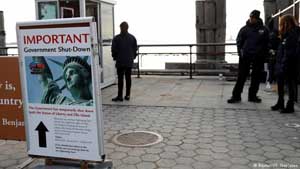 Both US parties have traded blame over the crisis that is directly affecting hundreds of thousands of Americans. A vote on a proposed budget deal has been pushed back as Congress remains at an impasse.

Hundreds of thousands of US public employees will be staying home from work on Monday as the government shutdown continues. In spite of the crisis and promises that progress had been made, lawmakers also announced that they had pushed back a crucial vote to resolve the issue.

The shutdown, the second for the US government in the past five years, came after congressional Republicans and Democrats failed to agree on a budget deal last week. The biggest sticking point in negotiations remains immigration reform, particularly the status of so-called “Dreamers,” immigrants who arrived in the US illegally as children but now hold jobs and high school diplomas.

Although there is bipartisan support for granting permanent legal status to Dreamers, President Donald Trump and several key Republican lawmakers continue to flip back and forth on the issue. The news has seen Trump’s approval ratings dip to 36 percent.

Thank you for calling the White House

In response to the shutdown, the White House even changed its answering machine message to blame Democrats for the disaster: “Thank you for calling the White House. Unfortunately, we cannot answer your call today, because Congressional Democrats are holding government funding, including funding for our troops and other national security priorities, hostage to an unrelated immigration debate.”

Lawmakers met over the weekend in a bid to end the impasse, but to no avail. Congress announced that a budget vote scheduled for 1 am local time on Monday morning had been pushed back 11 hours.

Government shutdowns can have catastrophic consequences for many in the US — it prevents access to healthcare for some, results in diminished wages for government workers and delays services like passport and visa processing.

The president reportedly leaned on Senate Majority Leader Mitch McConnell to change Senate rules to allow a simple majority of 51 to carry a vote, but Republicans have been unwilling to do so because such a rule change could be used against them the next time the party is in the minority.