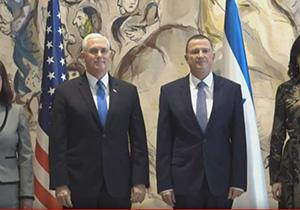 Israel has always held that Ma’aleh Adumim and E1 will be part of its permanent borders in any final-status agreement with the Palestinians.

Edelstein pressed Pence on the importance of building an industrial zone at the site, where both Israelis and Palestinians from the West Bank could work, and gave him a gift basket of products produced in a West Bank industrial zone with the words “There is no place like home” stamped on it. The basket included wine, halva and a Hebrew bible. The two men spoke in Edelstein’s office on Monday during Pence’s visit to the Knesset.

With the exception of a police station, plans to build more than 3,000 housing units on E1’s empty hilltops just outside of Jerusalem have been frozen for some 23 years.

Starting with former US president Bill Clinton, all US administrations have opposed construction in E1, holding that it posed a threat to the viability of a future Palestinian state.

Israel has always held that Ma’aleh Adumim and E1 will be part of its permanent borders in any final-status agreement with the Palestinians.

Right-wing politicians, as well as Ma’aleh Adumim Mayor Benny Kashriel, have hoped that US President Donald Trump would not only support that inclusion, but would also allow Israel to build on E1 and to annex the area in advance of a peace deal.

Trump has not held to his predecessors’ no-tolerance policy for settlements, but has not made any statements about Israel’s final borders or annexation.

According to Kashriel, the products in the gift basket were produced in the Mishor Adumim Industrial zone right outside of his city.

During his public remarks to Pence in the Knesset, Edelstein said, “When we meet again in my office I’ll give you a basket full of products manufactured in one of the industrial zones in Judea and Samaria where Jews and Arabs work together. This basket represents an island of peace, which thrives despite all the lies, despite all the incitement. What we need most of all is more such products and other industrial zones to prove that war is not a fateful decree and that living together is a real possibility.”