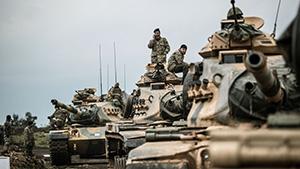 Turkey’s President Recep Tayyip Erdogan and the Trump administration stepped up their war of words as Turkish tanks, reinforced by an aerial bombardment, pressed their offensive against Syrian Kurdish fighters armed by the U.S.

Erdogan said U.S. weapons shipments to Kurdish forces in Syria would ultimately be turned against his country.

“One must be a fool not to understand that this treacherous project’s target is Turkey,” Erdogan said. “They refused to give arms to us with money but they are giving weapons to the terrorist organization free of charge. Why are we strategic partners? Why are we strategic allies?”

Longstanding frictions between the NATO allies over Washington’s backing of Syrian Kurdish fighters morphed into a proxy battle on Sunday when Ankara, in defiance of the U.S., sent tanks and warplanes across the border to chase the Kurdish forces from a border enclave they control. The offensive on Afrin has strained ties with Washington and complicated Russian efforts to end Syria’s seven-year civil war.

The increased violence in Afrin disrupts “a relatively stable area of Syria” and “distracts from international efforts to ensure the lasting defeat” of Islamic State, White House press secretary Sarah Sanders said in a statement she read to reporters in Washington. “We urge Turkey to exercise restraint in its military actions and rhetoric; ensure that its operations are limited in scope and duration; ensure humanitarian aid continues; and avoid civilian casualties.”

The trigger for the Afrin incursion was a plan by the U.S.-led coalition against Islamic State to set up a new armed force in an area of northeast Syria near Turkey’s border, controlled by Kurdish fighters who are working with American troops. Erdogan condemned a statement by one U.S. military official that a “border security force” was being established, and Secretary of State Rex Tillerson disowned that description.

The Kurds were the main ground force in the U.S. campaign to rout Islamic State from Syria, but Turkey regards them as a separatist menace with designs on its territory.

It says the Kurds will use the force as cover to stage attacks on Turkey and accuses them of working with the armed PKK group that’s long fought for autonomy in southeast Turkey and is branded as a terrorist organization by Turkey, the U.S. and European Union.

Erdogan said his country, which has no desire to establish a permanent presence in Syria, would withdraw once it achieves its objectives.

Turkey also has denied that the Afrin offensive has caused civilian casualties.

The lira erased earlier losses to gain as much as 0.9 percent against the dollar.

Tensions over U.S. support for the Syrian Kurds add to a line of disputes between Washington and Ankara, which accuses the U.S. of supporting the failed 2016 coup against Erdogan.

“As Turkey engages in violent action against those the U.S. has spent several years supporting as partners in the fight against the Islamic State, it is likely relations between Washington and Ankara will continue to worsen,” U.S.-based Soufan Group, a security consulting firm, said in a research note.