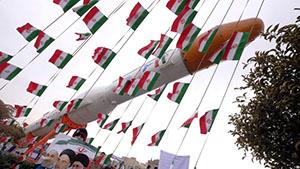 Iran’s ballistic missile program is not up for negotiation, top Iranian officials have restated, criticizing next week’s US diplomatic mission to Europe with a mandate to revise and “fix” the landmark 2015 nuclear agreement.

On Monday, Secretary of State Rex Tillerson announced the US is dispatching a diplomatic team to Europe to iron out “flaws in the nuclear agreement” signed by Iran and the so-called P5+1 – the five permanent members of the UN Security Council (China, France, Russia, the UK, and the US) + Germany.

Britain, France and Germany have reportedly already begun talks on a strategy to address Iran’s ballistic missile program while preserving the 2015 accord. Tehran is concerned the Europeans might cave in to Washington’s desire to rework the deal.

“Some of them [European signatories of the nuclear deal] think that if they make concessions to Trump on issues other than the nuclear deal, they can make him remain committed to the nuclear deal,” said Seyyed Abbas Araghchi, the Iranian Deputy Foreign Minister for Political Affairs. “This is a fully wrong policy and will certainly have a reverse outcome and we have clearly said this to Europe too.”

Iran nuclear deal is a disaster and the US will no longer certify this ill-conceived agreement – Pence https://t.co/EyHk2XyYPhpic.twitter.com/w71dSGetmF

The Joint Comprehensive Plan of Action (JCPOA) places limitations on Tehran’s nuclear energy program in return for the lifting of economic sanctions. There was, however, no agreement among the P5+1 to push for binding restrictions on Iran’s ballistic missile program. The International Atomic Energy Agency (IAEA) has since repeatedly confirmed that Iran is in full compliance with JCPOA.

Washington and the Europeans, however, claim that Tehran’s missile program violates UN Security Council Resolution 2231, which endorsed Tehran’s nuclear deal with the P5+1 states. Earlier this month, Trump waived sanctions against Iran for the “last time,” and warned European allies the US would pull out of the accord if they do not fix its “terrible flaws.”

Specifically, Trump called for the removal of the so-called “sunset clauses” which allows Iran to gradually resume nuclear activities in the next decade. Trump’s ultimatum was also paired with fresh sanctions against Tehran for alleged human rights abuses and ballistic missile development.

“If there is such a quote [from the French foreign minister] that we held talks, we deny it,” Iran’s foreign ministry spokesman said Monday. “We have not had any negotiations about our missile and defense capabilities and will not talk about these issues with others.”

“The news reported in the media that Iran held negotiations with Germany and UK on missile defense issues is untrue,” Araghchi further noted Monday, just days after returning from Berlin.

Russia has repeatedly warned that dismantling the Iran nuclear deal will have drastic security consequences for the entire world. “It is evident that the failure of the Joint Comprehensive Plan of Action, especially through the fault of one of the participants in the P5+1 group, will become an alarming signal for the whole architecture of international security, including prospects for the settlement of the nuclear problem of the Korean peninsula,” Russian Foreign Minister, Sergey Lavrov told the UN Security Council meeting last week.