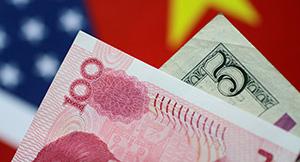 The Chinese yuan’s official midpoint was set at 6.4112 per dollar, the highest level since December 2015, on Monday.

According to the Chinese Bank of Communications, the tendency is linked to the weakening of the dollar and to the Chinese economy’s fundamental performance improvement, as well as to proper regulation of monetary flows by the Chinese government and a worldwide increase in demand for the yuan.

China’s economy currently totals 82.7 trillion yuan (about $13 trillion). According to official data, it grew by 6.9 percent in 2017, exceeding expectations. Furthermore, its growth is marked by a moderate surplus of pay balance despite increasing labor costs in the country and attempts by other states to hinder Chinese export development. Additionally, three quarters of the past year were marked by net capital inflow. Such favorable macroeconomic indicators increase confidence in the Chinese economy, which has a positive impact on the nation’s currency rate.

A decrease in the value of the dollar has largely contributed to the strengthening of the yuan. Investor confidence in the US economy is weakening amid the Trump administration’s major tax cut policy. On January 16, Chinese rating agency Dagong slashed the US’ credit rating to BBB+, putting the debt repayment capacity of the country below that of Botswana. According to the agency, the United States’ political situation and credit environment may undermine its economic base over the longer term. That, in turn, impedes the US federal government’s ability to service its debt.

The recent shutdown of the US government does little to fuel confidence. When Congress failed to agree on a 2018 budget project on Friday, the gears of government slowly ground to a halt. As a result, hundreds of thousands of state officials were put on leave without pay. (On Monday, the US Congress passed a continuing resolution to fund the government for another couple of weeks to continue budget debates, making the shutdown a brief one.)

Within this framework, many investors have turned to the yuan as a safe haven for investment. However, the trend of a strengthening yuan is unlikely to linger, Liu Dongmin, head of the International Finance Division at the Institute of World Economics and Policy at the Chinese Academy of Social Sciences, told Sputnik.

“There are two reasons why I think the tendency will not linger. First, the weakening of the US dollar will soon stop and the trend will reverse. The US economy is developing rather well with a visible trend of rising interest rates. Besides, the US is implementing a decrease in the Federal Reserve System’s assets, which stockpiled as a result of crisis response measures. As the US economy develops, the distribution of world assets will lean toward the dollar. Secondly, taking into account growth characteristics of the Chinese economy, constant strengthening of the yuan rate is unfavorable for China. We would prefer to see the yuan rate more flexible.”

Chinese authorities have for many years tried to transform the country’s economic structure from an export-oriented approach toward interior consumption, efforts in which have enjoyed substantial success. According to China’s Ministry of Commerce, consumption contributed 66.4 percent to national economic growth in 2016 and in 2017 the contribution is expected to exceed 70 percent.

Still, it is important that the currency doesn’t fall — and there is a significant basis for that. In 2015, Chinese stock markets crashed, causing a massive outflow of capital amid constrained investment opportunities. Typically, this kind of turbulence tanks the national currency rate, leading to drop in foreign investments. The Chinese government avoided that with a major intervention in the exchange market: gold and foreign currency reserves have been reduced by almost $1 trillion at the moment, whereas at the beginning of January 2016 they amounted as much as $3.14 trillion. The situation was stabilized, according to Bian Yongzu, a researcher with the Chongyang Institute for Financial Studies at the People’s University of China.

Finance experts agree that in 2018 the Chinese currency will remain stable, bolstered by sufficient gold and foreign exchange reserves and positive economic performance. Chinese finance authorities have already demonstrated to the world their ability to counter negative factors and keep difficult situations under control.