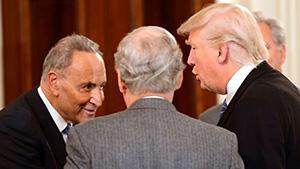 The government shutdown is officially over. Everyone involved is declaring victory. And everybody’s right. And wrong.

How right and how wrong they are will be revealed over time. For now, as the dust settles on the long-weekend shutdown of 2018, here’s the case for – and against – each side’s claims.

Why they won: Given that the Republican Party’s previous shutdown experiences – notably 2013 and 1995-96 – ended in near-total capitulation, anything short of that has to be seen as a unmitigated victory.

Their caucus stayed reasonably united, losing only four senators in Friday’s pre-shutdown vote, and mostly on-message. Their argument was simple – they would not negotiate an immigration deal with a shutdown gun held to their head. If that sounds familiar, it’s because it was the same logic Democrats used, effectively, in 2013.

What the Republicans conceded, a promise to vote on an immigration reform package in the Senate, was not a particularly heavy lift. There are plenty of Republicans who want to see so-called Dreamers, who entered the US as undocumented immigrant children and are now in danger of deportation, given some sort of permanent residency status. Nothing Senate Majority Leader Mitch McConnell agreed to will preclude Republicans from negotiating Democratic concessions on other immigration reforms, such as the border wall and ending the visa lottery and chain migration, in exchange for their support.

Why they lost: Despite a rather clear, concise Republican message – Democrats were shutting down the government to win protections for “illegal immigrants” – the American public, according to snap polls, sided with the Democratic position. The partisan divides were clear, but the highly coveted political independents were breaking to the left.

That may have changed if the shutdown dragged on longer, but it didn’t. So if Republicans hoped that the fight would give them a boost and help avoid what could be a Democratic wave in the mid-term elections later this year, they will likely be disappointed. This is the first time a shutdown has occurred when one party has controlled both the White House and Congress. If voters focus their ire on the ones in power, Republicans will bear the brunt of the blame.

In the meantime, while Mr McConnell’s guarantee of an immigration vote is vague at best, it could be used against him in three weeks if there’s no further action on the issue. And if a vote does take place, it is likely to exacerbate the clear rifts that have been exposed among Republicans on what to do about Dreamers.

Why they won: Uh. Give me a minute. OK, the Democrats didn’t have the strongest hand heading into this weekend’s shutdown showdown. They played their cards as best they could. They were able to convince a few Republicans – Jeff Flake of Arizona and Lindsey Graham of South Carolina – to fight by their side. They are also more likely to win over other sympathetic senators, like Susan Collins of Maine and Lisa Murkowski of Alaska, in future battles by backing down now.

The Democratic caucus largely stuck together through the weekend. Senate Majority Leader Chuck Schumer was able to give at-risk Democrats, up for re-election this year in conservative states, a pass on a tough shutdown vote, and Republicans weren’t able to pick off further support until the leadership was ready to accept Mr McConnell’s offer.

They have kept their powder dry for the next fight, in three weeks, without making any concessions and demonstrated that they are willing to take a more confrontational stance – at least for a few days – on an issue that’s dear to the liberal base. The US public tends to have a short memory as far as shutdowns go, so any damage they did by risking being branded as obstructionists is almost certainly temporary.

As part of the deal, the Children’s Health Insurance Programme (Chip) was reauthorised for a full six years. While this was a measure that had broad bipartisan support, Republicans had held it out to win concessions from Democrats on other issues. Chip has now been taken off the table.

While this was a Democratic play to show the base they were serious about protecting Dreamers, early indications are the base isn’t convinced.

“Today’s cave by Senate Democrats – led by weak-kneed, right-of-centre Democrats – is why people don’t believe the Democratic Party stands for anything,” writes Stephanie Taylor of Progressive Change Campaign Committee in a press statement. Not exactly hosannas for the good fight.

Even more telling is that nearly every 2020 Democratic hopeful in the Senate – Elizabeth Warren, Bernie Sanders, Kirsten Gillibrand, Kamala Harris, Cory Booker and Ron Wyden – were against reopening the government. Their position is that Mr McConnell’s guarantees of an intent to have an immigration vote – if no deal is reached in three weeks and the Democrats don’t shut down the government again – are written in sand.

You don’t need a weatherman to tell that this particular wind is blowing from the left.

Why he won: First and foremost, the president was able to make it through the first shutdown on his watch without doing anything to exacerbate the situation. Disruptions were kept to a minimum. Government services largely continued undisrupted. Even the national parks and museums, a key focus of past shutdowns, mostly stayed open.

The president himself was kept out of the public view over the weekend and his twitter feed – which often causes as many problems as it solves – was restrained and on message. He even fired off a tongue-in-cheek line sending his regards to the hundreds of thousands of women who marched in protest of his administration over the weekend.

Now he can claim that he stood on the side of defending a functioning government and protecting the US military. His characterisations of Democrats as obstructionists will pack a bit more of a punch.

It seems more likely at this point that if an immigration deal is eventually reached it will include funding for his Mexican border wall. The issue had been a non-starter for Democrats up until now, but Mr Schumer and his team showed a willingness to exchange the wall for Dreamer protections. The prospect that the president will someday pose proudly before a gleaming “Trump wall” – even if it will never stretch from the Gulf of Mexico to the Pacific or be paid for by Mexico – appears much more likely. That, by any accounts, is a win for the president.

Why he lost: Mr Schumer groused over the weekend that trying to work with Mr Trump was like negotiating with Jell-o. Every time they thought they had an agreement with the president, whether it was to accept a bipartisan deal on immigration or establish terms for re-opening the government, he would later back away or come up with new conditions.

Even Republicans – from Mr McConnell on down – expressed frustration that they were not receiving sufficient guidance from the president on what an acceptable deal might look like.

The White House released a number of photographs of Mr Trump “working” over the weekend to solve the shutdown impasse. The president sitting at his desk, talking on the phone. The president meeting with smiling staffers. The president walking, stern-faced, down a corridor. By most accounts, however, the president was a non-factor in the congressional negotiations that led, ultimately, to a government reopening. Instead, according to press reports, he stewed in the White House, frustrated he couldn’t head to his Mar-a-Lago resort for a gala celebration of the anniversary of his inauguration.

“A great deal-making president sat on the sidelines,” Mr Schumer said as he announced Democrats would agree to Mr McConnell’s deal.

According to White House Press Secretary Sarah Huckabee Sanders, the role of the president during the crisis was to ensure that things “went smoothly”. If that’s the bar, it’s debatable the president met it